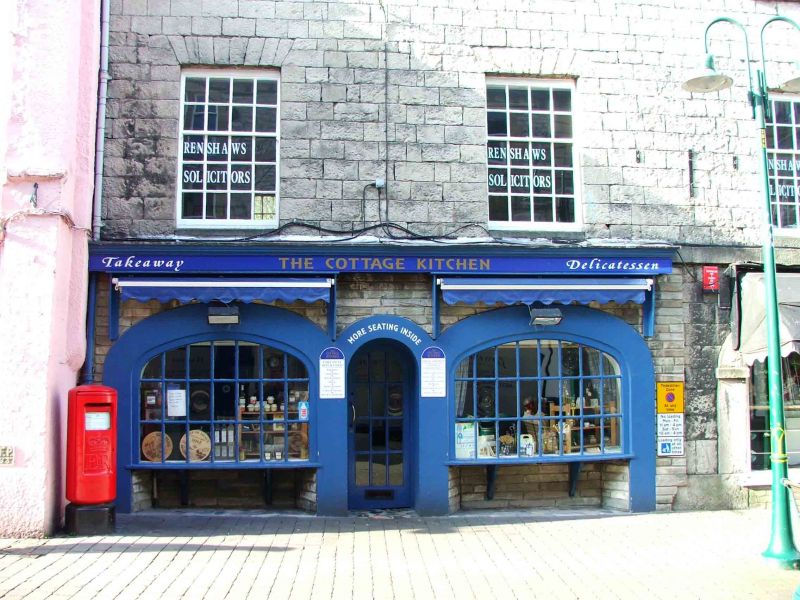 Fire Engine House with Registrar' Offices over, now shops with
offices over. 1838, for the Borough Council; altered. Squared
rough dressed limestone in graduated courses (rear of random
rubble), slate roof. Rectangular plan parallel to street, with
entrance to offices at first floor of rear. Three storeys and
attic, 3 windows, symmetrical; with a plinth and first floor band
carried round. The ground floor (the former fire engine house)
has 3 wide elliptical-arched wagon entrances that to the right
with imposts and the others, including a round headed doorway
between them, now rendered; all the archways now glazed as shop
windows and furnished with C20 canopies. The upper floors have
restored 8 over 12 small paned sash windows, those at first floor
with flat arched heads and those above with raised sills and
stone lintels. Gable chimney to left, ridge chimney offset right
of centre. The right hand gable wall has a doorway and window at
ground floor, and small lunette to the attic. Rear: central
doorway to former Registrar's Office approached by dog-legged
steps and stone deck protected by spear head railings; doorway
with raised square cut jambs and lintel, chamfered imposts and
recessed door; fenestration similar to front except that sashes
are unhorned and appear to be original. INTERIOR: Registrar's
Office in centre of 1st floor, with former waiting room to west
and former strong room to east, the latter fire proofed with a
cast iron door, stone flagged floor and slate shelving. Curved
staircase to 2nd floor. HISTORY: erected in the first year of the
Civil Registration of births, deaths and marriages.
Forms group with no. 2 Police Yard to rear (q.v.), which contains
former lock-up.