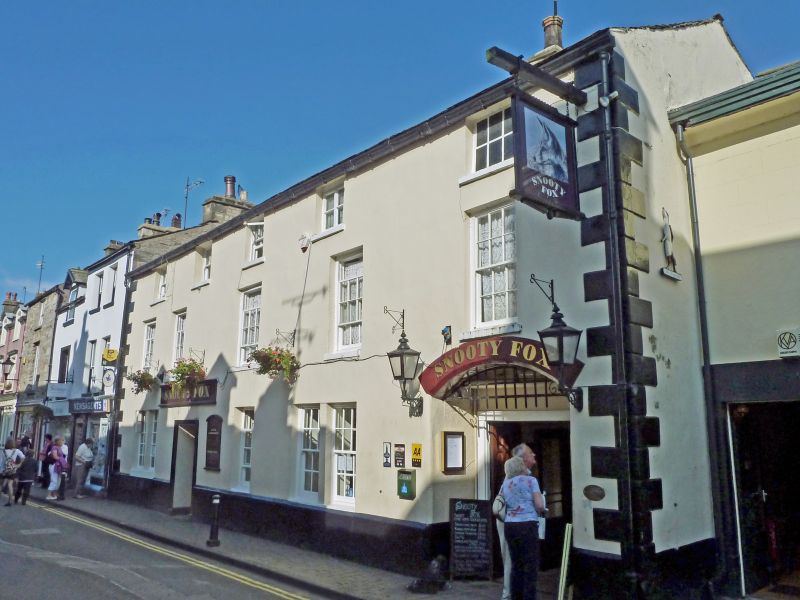 2.
Late C17 or early C18 inn. Three storeys. Plastered. Slate roof. Four chimneys.
Plinth and rusticated quoins. Windows with sills and plain reveals. Two on ground
floor coupled. All but left hand ground floor sashed with all glazing bars, though
two on second floor were until recently blind. Doorway with wooden architrave which
formally had consoled hood over. Six panel door. Passageway to right hand side
with segmental chamfered head recently closed off.
Interior. Ground floor considerably altered but retains one large corbelled chimney-
piece with moulded surround and cornice, incised keystone and two round headed niches
in either jamb. To left of this a fitted spice cupboard with "R.P. 1711" on door.
To right a larger cupboard with raised and fielded panels, inserted in this position
since 1934. Four flight closed string dogleg stair with square newels and heavy
hand rail but modern stick balusters. Top flight has renewed splat balusters of late
C17 type. On first floor round headed niche in wall of recently subdivided room (one
of former pair). Two C17 and three C18 panelled doors. On second floor three latched.
plank doors, one C17 Panelled door, one C18 door with raised and fielded panels. In
attic one C17 panelled door. Collar and tie beam roof.
Formerly the Green Dragon and one of the principal inns, with an Assembly Room in the
demolished outbuildings.