A Grade I Listed Building in Ingoldsby, Grantham, Lincolnshire 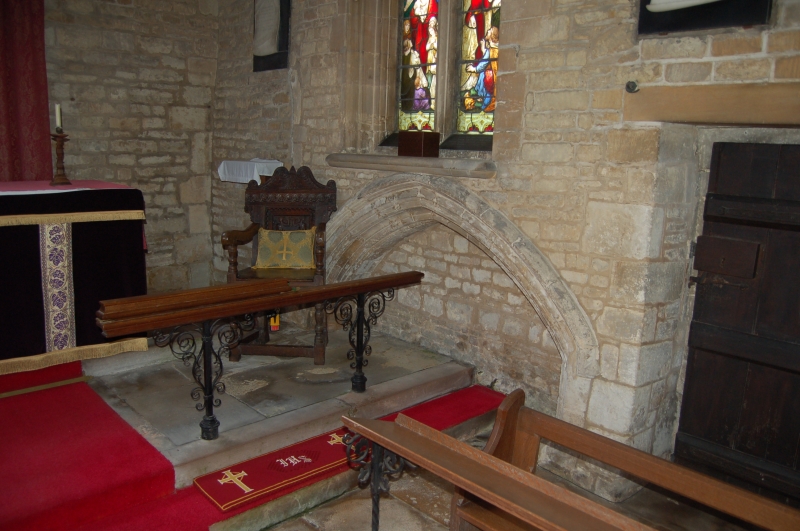 Parish Church; C12, C14, C15, C16, Cl7, c.1700 with C19 alterations.
Ashlar, dressed and coursed limestone rubble; slate and lead roofs.
West tower, nave with clerestorey, 2 aisles, south porch, chancel with
south porch. C16 ashlar rather squat 3 stage tower with moulded plinth,
2 string courses, battlemented parapet with corner crocketed pinnacles above
stepped clasping buttresses. C17 3 light cross mullioned west window.
2 light C16 belfry openings to each face, with 4 centre heads and hood
moulds. North aisle coursed limestone rubble with slate roof and stone
coped gables, 2 bays marked by 3 added stepped buttresses, in western bay
a C15 north doorway with deeply splayed hood mould, door having ogee panellel
carved tracery. West, south and east aisle windows all C16 3 light with
flat heads under hood moulds with label stops. Plain north clerestorey,
blank, with cornice and parapet with saddleback coping, concealing lead roof.
Chancel is dressed rubble with stone coped gables and slate roof. One side
buttress at east end. 2 windows both with hood moulds and label stops, the
eastern one being C15 tall 3 light with panelled tracery and triangular head,
the other being C14 2 light with curvilinear tracery. The chancel has been
shortened and largely rebuilt in C19 and all windows are reset. The C15
east window; set high up, has 3 lights with unusual curvilinear tracery,
curved triangular head with hood mould and curious sickle terminals. A C18
tablet is set in the wall. The south side of the chancel is in coursed
limestone rubble with a string course at cill level. A small priests porch
in ashlar has been added in C19, having a steeply pointed gable with kneelers,
and a sharply pointed 4 centre arch. To the east of the porch is a C14
2 light window and to the west a C15 3 light window, both matching their
equivalents on the north side of the chancel. The south aisle is in coursed
limestone rubble with lead roof behind plain parapet with cornice and
saddleback coping. The east window which has been cut by the later shallower
roof pitch is a late C13 3 light window with Y tracery and a shallow hood
mould with tiny human mask stops. The south window is C15 3 light with
triangular head. The C16 south porch has a roll moulded plinth and a string
course and a blocked triangular headed east window. The plain moulded parapet
conceals a lead roof, which is drained by a defaced gargoyle with a ruff.
The porch opening has been recut in C19. The south door is C15 with hood mould
over having shield label stops. The door has C15 ogee decoration and a
wicket with an ogee head. The south clerestorey has a plain parapet and
three 2-light C16 windows with hood moulds under continuous cornice.
Interior; The 3 bay north arcade is late C12 with double chamfered semi-
circular arches on semi-circular piers with circular bases on square blocks.
The western respond and pier have stiff leaf capitals; the eastern respond and
pier have waterleaf capitals. The 3 bay south arcade is c.1700 with double
splay pointed arches with Doric capitals and cylindrical piers on cushion
bases. The tower,which is embraced by the aisles has 3 tower arches of
similar design to the south arcade, the chancel arch has also been recut at
that time. The tower arch opening has graffiti dated 1705. In the south
aisle is a C15 tomb recess with damaged cusped decoration, and a trefoil
headed piscina. In the chancel is a C15 tomb recess and a blocked opening
which shows that the chancel has been shortened. The nave roof is C16 with
large tie beams and braces to corbels. Fittings; the pulpit and altar rails
are C20. In the chancel are 2 fine C16 chairs. The octagonal font is C15
with shields in cusped panels and stem with traceried designs. In the south
aisle east window are C14 glass fragments reset and dated "JH 1801 CW"