A Grade I Listed Building in Lenton Keisby and Osgodby, Lincolnshire 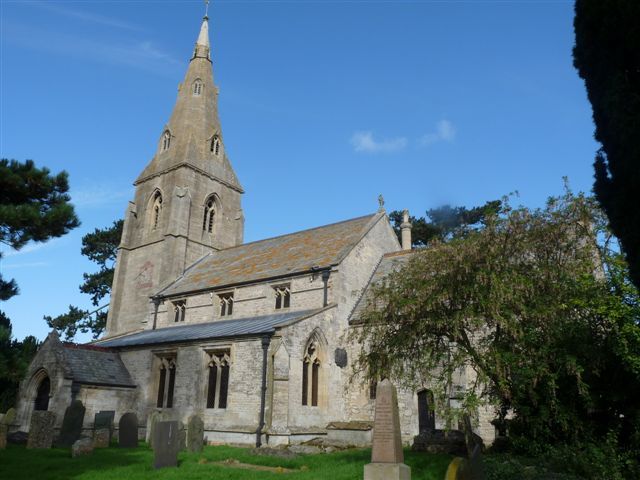 Parish Church; C13, C14, C15, restored in 1879 by James Fowler of Louth.
Ashlar, coursed limestone rubble, lead and slate roof. Western tower, nave,
with clerestorey, south aisle and porch, chancel. The ashlar C14
tower has 3 stages with triple moulded plinth and 2 string courses with
stepped corner buttresses. The west side has a 2 light C14 window with
curvilinear tracery, hood mould and head stops in the 1st stage. The
2nd stage has an empty niche with crocketed and finial top. The south
side is blank in the first 2 stages, but has large square painted sundial
in red surround with gold numerals in the 2nd stage. All faces have C14
2 light with reticulated tracery belfry openings. The octagonal broach
spire sits on a decorated corbel table and has 3 tiers of alternating lucarnes.
The north side of the nave and blank clerestorey is in coursed limestone
rubble on its upper part and has a slate roof with decorated ridge tiles, and
a stone coped gable with cross fleury to ridge. It is in 2 bays marked by
3 stepped buttresses and has: a double moulded plinth. There is a blocked
north door, and two 3-light C15 windows with panel tracery and hood moulds.
The north side of the chancel has similar roof and gable to the nave. It
has a single 2 light C15 window with cusped tracery and 4 centre head and a
blocked 4 centre window. The east window sits on a splayed string course,
and is 3 light C15 with triangular head, and hood mould. The south side has
an off centre small priets door with 4 centre head flanked by single C15 2 light
windows with 4 centre heads. The south aisle has a lead roof. The west
window is C14 2 light with reticulated tracery. The south face has moulded
plinth and cornice and two 2-light C14 windows with recut reticulated tracery,
flat heads and hood moulds. The ashlar south porch has slate roof and stone
coped gable with cross fleury. The plinth is panelled with quatrefoils
below a splayed roll moulding. The arch is recut and has 14 engaged nook
shafts, and hood moulds with human mask labels. Inside the porch is a reset
C14 niche with ogee head, small vault and pinnacles. Below is an inscription
regarding a legacy to Mary, widow of Edward Parnham, dated 1701. The
south doorway has a plain moulded surround, and could be C13. The western south
aisle window is C13 lancet. The clerestorey has 3 C15 2 light windows with
reticulated tracery under a continuous hood mould. Interior; The 3 bay south
arcade is C13 with double chamfered pointed arches and 2 octagonal piers; one
with a stiff leaf capital. The east respond is also stiff leaf and
the west respond sits on a corbel head. The tower arch is a C14 small opening
and the tower floor is supported on corbels which are reused C13 nook shaft capitals
The C14 chancel arch has octagonal responds. In the south aisle is a cusped
piscina containing a statue, said to be Roman. At the east end are 2 plain
statue brackets. In the north nave wall are blocked entrances, upper and
lower, to the rood stairs. The nave and chancel roof, pews, pulpit, lectern
and Minton tiled floor date from the 1879 restoration. C15 octagonal font
with shields in pointed quatrefoils. Monuments; In the chancel is a tomb to
Bartholomew Armyne of Osgodby d.1605. An altar table on 6 stubby Ionic piers
decorated with armorial elements with a frieze of heraldic shields below.
On the table 3 fluted composite columns with leafy bases, supporting a cornice
then smaller columns supporting a full entablature with 2 triangular pediments.
Four inscribed panels, set between the main columns, are bordered with egg
and dart. A stone tablet eared and shouldered, with deaths head mask in
circle on top, to Jane Chaworth d.1606. Plain slate tablet to Mary Blomer
d.1759. Plain marble tablet with pediment to Franict3 Hetherington d.1768.