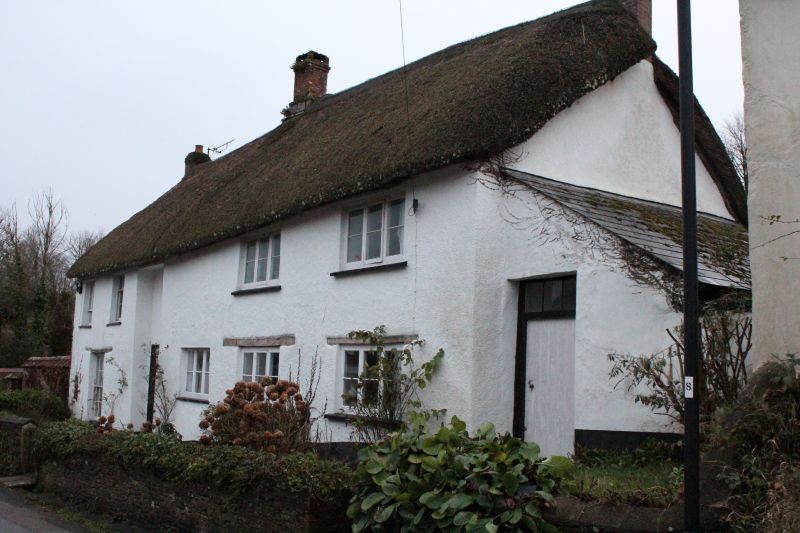 SAMPFORD COURTENAY SAMPFORD COURTENAY
SS 60 SW
11/191 Middle Town
GV II
House, originally farmhouse. Probably C16 with early-mid C17 addition. Rendered
cob walls. Thatch roof gabled to left end, hipped to right. 3 stacks - 1 brick at
either gable end and one axial of granite ashlar with moulded dripcourse and
tapering cap.
Plan: 3-room and through passage plan with lower end to the left. Hall stack backs
onto the passage. Although early roof trusses are known to exist they could not be
inspected at the time of survey for evidence of smoke-blackening, so it is uncertain
if this was an open hall house or not and if not it could be as late as early C17.
The rear wing is early-mid C17 judging from the style of doorway leading to it.
Exterior: 2 storeys. Asymmetrical 4-window front with a full-height recess to left
of centre. To its right all the windows are circa early C20 3-light casements. The
left-hand part has a pane C19 sash with a C20 2-light casement to its left on lst
floor. Large early C19 16 pane sash below. In the recessed section is a
contemporary 6 panel door with rectangular fanlight above which has decorative
glazing bars. Gabled rear wing behind rignt-hand end.
Interior: (part of ground floor only accessible). Hall has chamfered cross beams
with hollow step stops. Fireplace has granite jambs but its lintel is obscured by a
C19 overmantle. At the rear of the hall is a chamfered wooden doorframe with
cranked head leading to the rear wing. The inner room has a chamfered ceiling beam
and a C19 classical chimneypiece. Roof structure not seen but consists of jointed
crucks, their exact form is uncertain so it is not clear if they are medieval or
not.
Source: N. W. Alcock - Cruck Catalogue