A Grade I Listed Building in Bishopsteignton, Devon 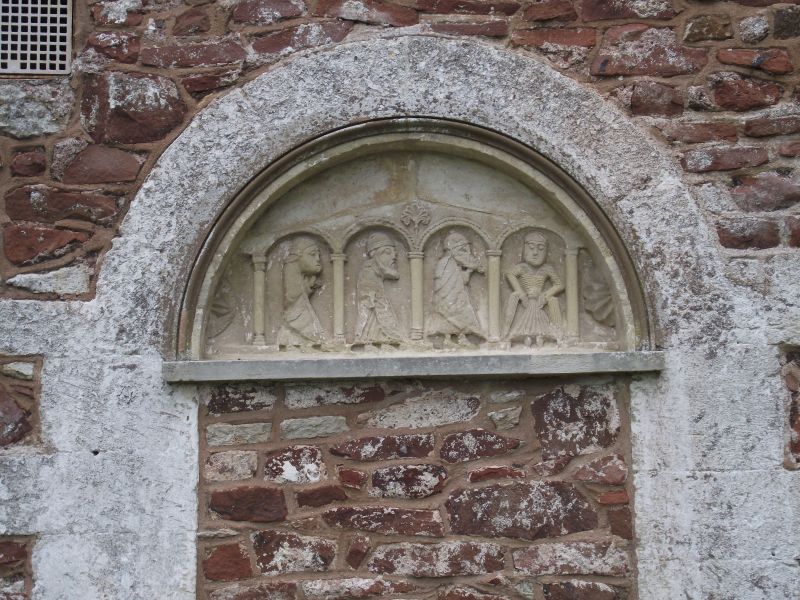 Parish church. C12 origins ; C15 north aisle, substantial rebuilding of 1815,
replacing the crosswing tower with a tower at the west end of the aisle, architect
William Burgess of Exeter ; chancel enlarged 1825, architect Andrew Patey of
Teignmouth ; restoration of 1854 with addition of north chancel aisle "from the
designs of Mr J.W. Rowell of Teignmouth" (DRO), 1863 alterations to tower ; chancel
restoration of 1912. Red sandstone rubble with white freestone dressings and slate
roof with crested ridge tiles.
Plan: The C12 plan of nave, chancel and crossing tower was extended in the C15 by a
5-bay north aisle, (no extant evidence of transepts). The church was partly ruinous
in 1814 when the crossing tower was dismantled and some of the old stone was re-used
in the new tower built at the west end of the north aisle. Chancel enlargement of
1825 ; north chancel aisle/organ chamber and general refurbishment of 1854 ; spire
removed and upper parts of tower rebuilt in 1863 ; chancel restored and chancel arch
and vestry (at east end of aisle) added in 1912. Exceptional C12 west doorway and
south tympanum ; the pre-ecclesiological alterations to the fabric are well-
documented and historically interesting (Dr Chris Brooks), most of the windows
tracery is 1820s, presumably copying the medieval originals.
Exterior: Evidence of the extensive alterations in the masonry. Chancel with east
end buttress, Beerstone quoins, 3-light C19 Perpendicular window, niche in gable, 3-
light C19 Perpendicular south window. Nave with 3 3-light C19 Perpendicular windows
with a remarkable C12 tympanum, "the finest in the county" (Cresswell), above a
blocked doorway to the west. The 3 magi are shown in profile below an arcade with
the virgin at the right end, face on, in a pleated dress : the figures and detail
highly stylized. 3-light C19 Perpendicular west window above a C12 west doorway,
"one of the best in Devon" (Pevsner) with 2 orders of colonettes with carved
capitals and zig-zag and scale patterns on the shafts. 3 orders of carved decoration
to the doorway, the outer order with fleur de lis decoration, the inner order with
beakheads and grotesque masks holding a roll moulding. There has been some C19 re-
cutting to the doorway. The north aisle has 4 3-light C19 Perpendicular windows with
a rectangular rood loft stair turret, a blocked 2-centred doorway and 3-light
Perpendicular C19 east window. 1912 lean-to vestry at east end with mullioned
windows. 3-stage battlemented tower dated 1815, the upper parts Gothicized in 1863.
The tower has big crocketted corner pinnacles with carved heads, pinnacles to each
face and a string course carved with flowers and grotesques. 2-light 1863 Decorated
belfry openings with stone lattice work on all 4 faces, the north face also has a
round-headed bellringers' window. The south face has a C19 Romanesque window
inserted into an earlier arched opening. The west face has a C19 Romanesque doorway
with 3 orders of carved chevron decoration and 2 orders of colonnettes ; clock in
stone frame ; datestone "This tower was built Anno Domini MDCCCXV Wm Rossiter and Jn
Hammond Wardens".
Interior: Plastered walls ; timber chancel arch of 1912 ; 5-bay north arcade with
moulded piers, re-cut foliage capitals and rounded moulded arches. Nave and aisle
roofs C19 unceiled wagons, plastered behind the rafters, with carved foliage bosses ;
chancel roof a boarded wagon with painted decoration of 1912. The tower has a small
doorway into the aisle in a Tudor arched recess, blocked recess (probably associated
with a former gallery) above. Wall between the 1854 chancel aisle/organ chamber
pierced by a high stone arch with brattished sill and angel corbels and a doorway
with carved spandrels and a hoodmould, wall between aisle and chancel aisle/organ
chamber pierced by an arch with carved foliage bosses and flowers. The organ has
been moved into the easternmost bay of the aisle.
The chancel has an early C19 brattished stone reredos with blind tracery and a text ;
late C19/early C20 choir stalls. The nave has a timber drum pulpit with blind
traceried panels, set of C19 benches with panelled ends. C12 font with C19 re-
cutting, with a round bowl with a decorated rim and palmettes carved on the bowl,
cable and scallop mouldings to stem.
Monuments Late C17 wall monument on north wall of chancel, commemorating Sir Peter
Lear, died 1682, inscription panel with a scrolled pediment and achievement. Large
late C17 classical mural tablet with broken pediment and achievement in the aisle
commemorating members of the Martyn family of Lindridge. Several early C19 white
marble wall tablets, various ledger stones re-used as floor slabs.
Glass South window in chancel, dated 1858 with the marker's mark of William
Warrington. Two fine easternmost windows in the nave with 1850s and 1860s memorial
dates, probably by Gibbs. The westernmost nave window probably by Lavers and
Barraud, memorial date of 1873. The aisle has the remains of an 1850s quarry and
medallion scheme, one window replaced with a memorial date of 1868, possibly by Drake
of Exeter. West window by Andrew Johnston being put in at time of survey (1987).
An important church for the quality of the C12 work and unusual for the well
documented alterations to the fabric in the early C19.
Pevsner, South Devon (1952), p. 53.
Cresswell, B. Notes on the Churches of the Deanery of Kenn (1912) pp. 32-29.
W.D. Cleland (ed.) Bishopsteignton, South Devon, A Short History and Guide, (1930).
Dr Chris Brooks, unpublished notes on the parish records of Bishopsteignton.
The Bishopsteignton museum has a number of prints of the church prior to the C19
restorations.