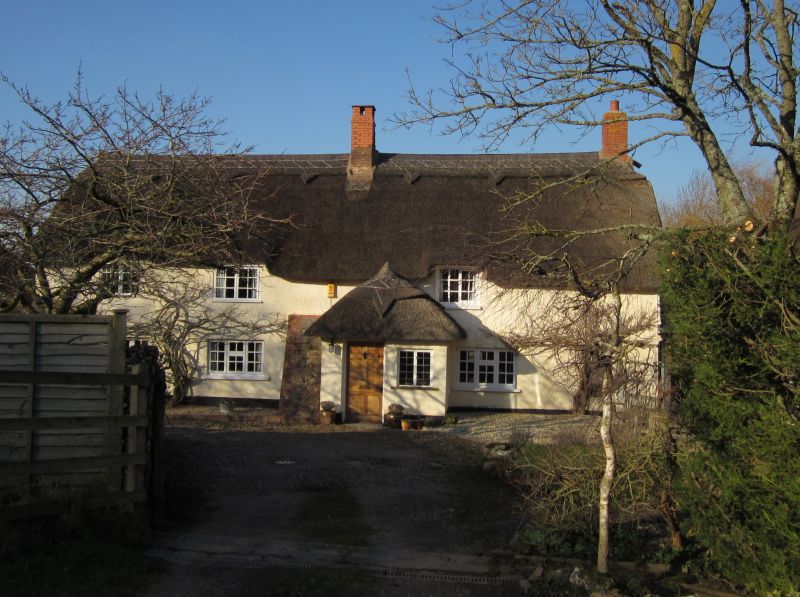 Farmhouse. Probably late C15 with major C16 and C17 improvements, thoroughly
modernised circa 1980. Plastered cob on stone rubble footings; stone rubble stacks
topped with C20 brick; thatch roof.
Plan and development: 3-room-and-through-passage plan house built across a gentle
hillslope and facing south. At the right (east) end is a service end kitchen with
gable-end stack and projecting curing chamber alongside. Circa 1980 the passage
rear doorway was blocked and the lower passage partition removed to unite passage
and kitchen. Hall has an axial stack backing onto the former passage. The upper
hall partition has been removed to unite the former hall and inner room. The inner
room is unheated. Present stairs rising from passage along the rear wall of the
hall is C20.
The late C15 house was open to the roof from end to end and heated by an open hearth
fire. It may have been a smaller house since there is a second phase of smoke-
blackened roof. The inner room was floored first and the hall fireplace was
inserted into the open hall, both in the mid or late C16. The hall was floored, in
the early C17. The service end was rebuilt as a kitchen in the mid C17. House is 2
storeys with outshot to rear, rebuilt in C20.
Exterior: irregular 3-window front of circa 1980 casements with glazing bars, those
on the first floor rising a little into the eaves. Passage front doorway is right
of centre and contains a circa 1980 door behind a contemporary thatch-roofed porch.
Roof is gable-ended.
Interior: the former inner room has an axial beam with deep hollow chamfers and
lambstongue stops. The hall has 3 soffit-chamfered and step-stopped axial beams.
The large fireplace here is of red sandstone ashlar with a soffit-chamfered oak
lintel on which are some ancient graffittis (some initials in patterns like
merchant's marks). The oven is C19. The doorway from hall to passage is an oak
Tudor arch. The kitchen crossbeam is soffit-chamfered with step stops. The massive
kitchen fireplace has a soffit-chamfered oak lintel which continues further left
across the front of a very well-preserved walk-in curing chamber. No early
carpentry shows on the first floor apart from the roof. The roof contains 3 phases,
all carried on side-pegged jointed crucks, but only the earliest 2 phases smoke-
blackened from the open hearth fire. The earliest truss is now closed by the
partition between the hall and inner room chambers. It has a saddle and originally
supported a square set ridge (Alcock's apex type C). There is also a disused hip
cruck this end. The second phase of roof is over the hall and the truss here has a
small triangular yoke and a diagonal ridge. (Alcock's apex type L2). Here the
whole roof structure including the common rafters and underside of the thatch is
sooted. The clean C17 truss over the kitchen is of conventional construction.
This is an interesting farmhouse containing an unusually early roof truss and a
remarkably well-preserved curing chamber amongst its features.