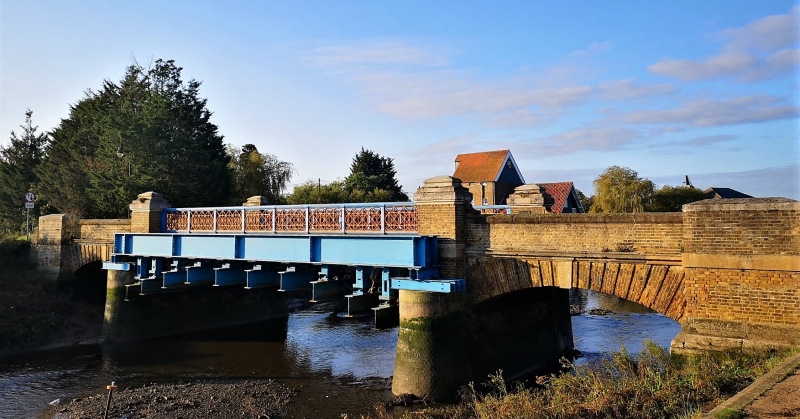 This asset was previously listed twice also under List entry 1237526 in the Parish of Rawreth. This entry was removed from the List on 01/12/2014.

Road bridge crossing the tidal River Crouch. Circa 1872. William Webster, St.
Martin's Place, Trafalgar Square, London, at a cost of £3,500. Cast iron centre
arch, gault brick side arches with brick parapets and end pillars. The centre
ribbed arch of 47 feet has a cast iron panelled face to east with 5 foliated tie
bosses and trellised cast iron parapet with moulded rail. Side arches each of
20 feet with brick rusticated keystones and moulded bases. Moulded band over
arch, chamfered coping. The central pillars with moulded heads, end pillars
with chamfered heads. Rounded cut waters. Total length of bridge 117 feet.
Records of bridges on this site date to 1372. The previous bridge c1845 by
Thos. Hopper was demolished by a steam traction engine thus the specification
for this bridge was stringent. "Composed of best soft grey metal. The whole of
the girders to be put together in the yard and proved in the presence of the
architect at the contractor's risk with a hydraulic ram, with the following
weights in the centre ... each external girder proved with a weight of 16½ tons
in the centre with a clear bearing of 47 feet. Each girder to return at once to
its original form after proof and to remain without permanent set." The bridge
had a clear width between parapets of 18 feet and for over 100 years carried all
road traffic across the River Crouch. During the past few years, the bridge has
been widened to the west face to accommodate 2 lane traffic. The original
finials are now erected in front of Cromwell House, Rettendon, to the north west
of the bridge. Local history studies. Leslie T. Newman. Batsford Guide to
Industrial Archaeology in East Anglia. J. Booker.