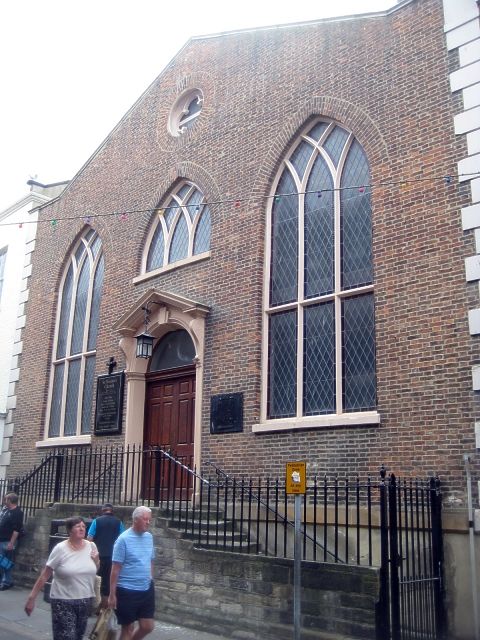 The E elevation, to Baxter Street has two flights of steps with iron railings up the W doorway. Doorcase with open pediment on consoles with a dentil cornice, a keyblock and curious shafts to the jambs; C20 door. To left and right large 3-light transomed windows with intersecting glazing bars; similar half window over the door. The timber bellcote referred to in the previous list description has been removed. 3 round-headed E windows to sanctuary. The galleries are lit from probably early C20 segmental-headed windows on the N and S sides and, from the E, from c. early C19 windows with intersecting glazing bars.

Interior: Galleries on W, N and S sides have fronts with fielded panels and are supported on stout timber columns. Utilitarian king post and strut roof with outer posts and struts, boarded behind. Round-headed sanctuary arch, the spandrels painted with alpha and omega symbols. The apse has a flat ceiling and is top-lit. The 1821 internal porch consists of a timber panelled screen with a pretty internal fanlight with intersecting glazing bars. Gallery stairs have turned balusters. Some C18 gallery benches survive, painted light green, including what appears to be a one-seater privy in one of the back benches on the ritual N side. The other fittings are late C19 and C20. English altar. Early C20 3-bay timber chancel screen with round-headed openings, figure niches and rood figures. Early C20 polygonal timber pulpit with dentil cornice and classical detail. 1914 font with large square bowl on a circular stem with corner shafts. Late C19 nave benches, the ends with chamfered corners and rounded shoulders. C19 choir stalls with poppyhead finials to the ends, the frontals pierced with shouldered arches.

Historical Note: The oak posts supporting the gallery were supplied by a mast maker of Whitby, Isaac Allanson. Men from his yards were deployed on the church when they could be spared.

An unusual example of an C18 brick-fronted church with Gothic detail to windows and classical doorway, front integrated with street. Interior preserves a good example of a 3-sided gallery with panelled front. Chancel & apse added c.1890.