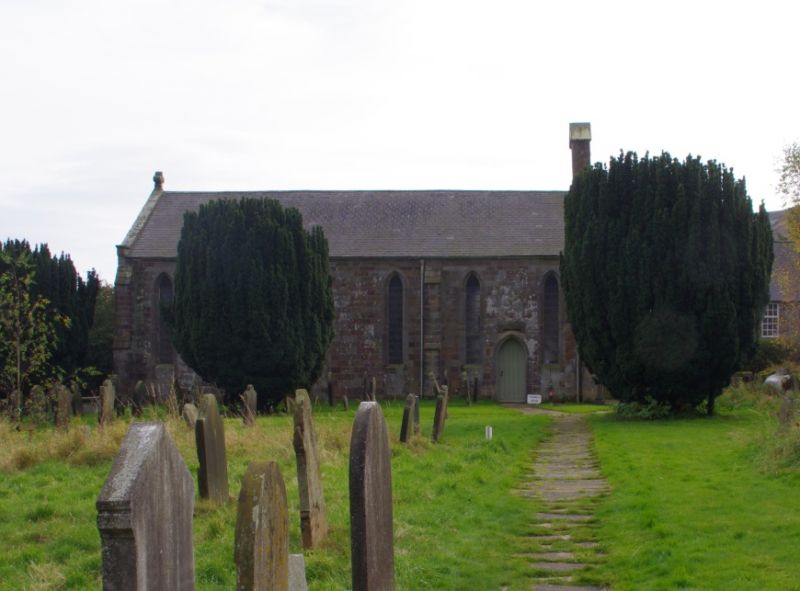 ROSE DALE EAST SIDE ROSEDALE ABBEY
SE 7295
16/47 Church of St Mary and St
Laurence
GV II
Church. 1839, replacing the C14 Priory Chapel and incorporating one C14
window from the former Priory (qv); gallery inserted later in C19, probably
when East and West Rosedale became one parish in 1876. By Lewis Vulliamy.
Dressed sandstone with sandstone ashlar dressings and slate roof. West
bellcote; 6-bay nave and continuous sanctuary; south vestry. West end:
panelled double doors recessed in double-chamfered 2-centred doorway.
2 lancets above. Gabled bellcote with pointed bell opening. South side:
6 bays articulated 1:2:2:1 by end and intermediate offset buttresses.
Gabled vestry projects from the sixth bay. Pointed panelled door in second
bay to west. Remaining bays contain full-height lancets. Vestry gable end
incorporates reused window of 2 pointed lights with chamfered Y tracery and
a cinquefoil over, much decayed. Both returns contain single lancets with
pointed bordered lights. Church north side repeats the south without the
vestry. A stone over the door has a recessed centre panel encompassing the
words "Omnia Vanitas" in low relief. The east end has 3 stepped lancets.
All openings are splayed and all windows have diamond lattice glazing.
Coped gables with plain kneelers. Gable crosses to vestry and east end.
Interior: pews of 1907 by Thompson of Kilburn. Carved oak lectern from
Holland, presented to the church in the late C19, by George Leeman. Near
the sanctuary and slightly to the north, is a graveslab on which traces of a
foliated cross are faintly visible. The Bishop's Chair in the sanctuary is
constructed of ancient stones from the Priory. Against the exterior of the
east wall of the Church is a stone coffin, without cover, shaped and
hollowed out to form a neck and head rest. It was found in the churchyard
in 1886 by the Sexton.