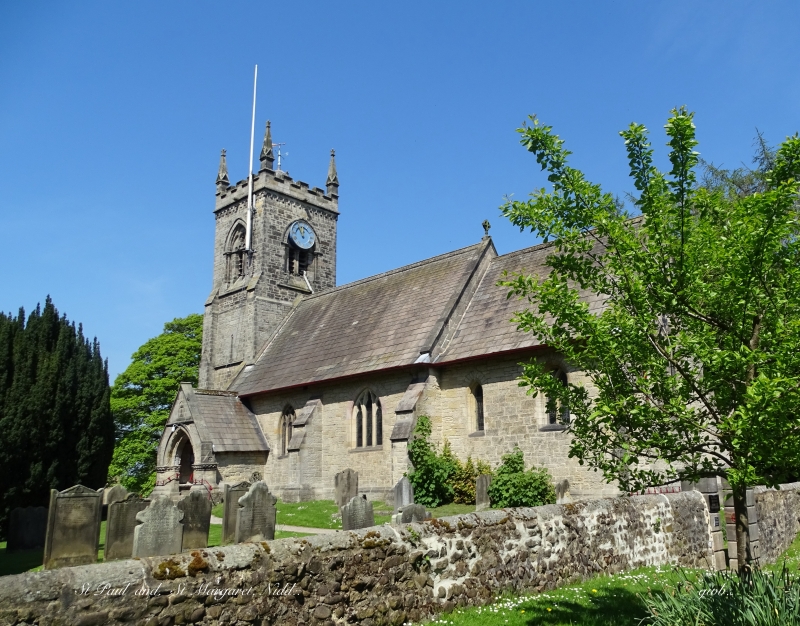 Church. 1866 by Healey for Miss Rawson of Nidd Hall. Gritstone, graduated
grey slate roof. 4-bay nave with west tower of 3 stages, north aisle and
south porch; 2-bay chancel. Gothic arch to gabled porch; roll moulding and
hoodmould possibly C13. Nave windows of 3 cusped lights, chancel of 1 and 2
lights. Large buttresses; gable copings, cross finials. 3-light east
window with 2 quatrefoil and I trefoil opening under a hoodmould. The
north aisle has three 2-light and one 3-light window; the vestry has a
plain 4-light window. The west tower has angle buttresses up to bell stage,
gableted to top of first stage, paired lancets to west, narrow lancets on
each side to second stage and elaborate 2-light belfry openings with central
shaft in large pointed arch with attached shafts, hoodmould and pierced
quatrefoil and inner cusping to tympanum. Embattled parapets and crocketed
finials. Interior. The porch is lined in limestone ashlar and the inner
board door has 3-pronged hinges. 3 quatrefoil columns to the north aisle of
the nave which is floored, together with the chancel, with polychrome tiles.
The font in the base of the tower is circular with a deep rim band as is
from the earlier church as are several pieces of carved stone. The walls of
the church are very plain, unplastered; memorials are to the Rawson and
Butler (Mountgarret) families. The stained glass window in bay 2 of the
north aisle depicts the nativity with shepherds and is a memorial to Henry
Edmund the 13th Viscount Mountgarret of Nidd Hall (qv), who died in 1900.
It is probably the workmanship of Charles Kempe, as is the window in bay 4
which is a memorial to Elizabeth Rawson (d1900) and depicts the Madonna and
child flanked by Simeon and Psalmist.