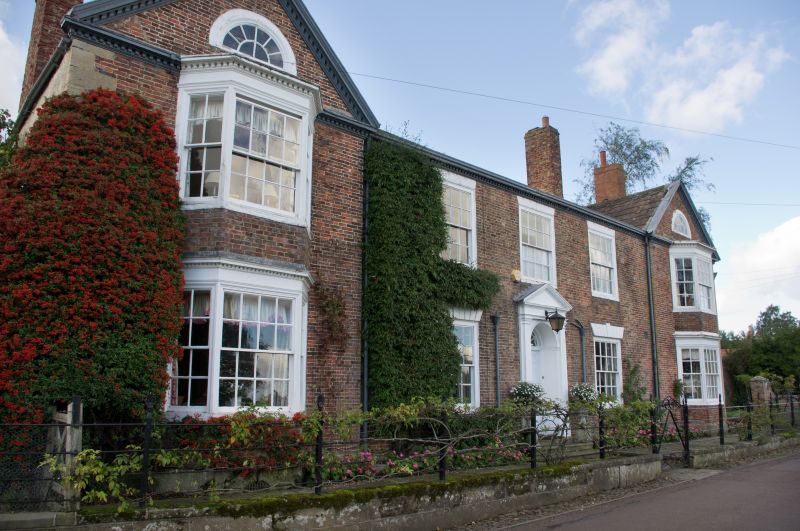 Large house, now 2 dwellings. Late C17, altered and enlarged in the C19 and C20. Small brown bricks in Flemish bond, ashlar quoins, stone slate roof. 2 storeys with attics, 5 bays, the 2 outer bays extended to the rear and forming a U-shaped plan overall. East front: central 6-panel door with fanlight and wooden doorcase composed of flanking pilasters with entablature and dentilled pediment. Flanking and 3 windows above: 16-pane sashes with keyed incised lintels and stone sills. The outer bays: fine 2-storey canted bay windows with 16-pane sashes and dentilled cornices, pedimented gables with lunette windows over. Dentilled eaves cornice; ridge stacks, those to right renewed. Rear: central blocked doorway, now a window with fanlight, in original wood doorcase painted to imitate stone; sash window above, now blocked; rear wing on left, rendered, has sashes of early form; rear wing on right (now forming Downing House) is probably C19 and brick. Right return: 3 bays. Pebble-dashed. C20 doors and fenestration apart from a sash with glazing bars to first floor, left. Interior: at the time of listing the building was divided to right of the central door, Laurence House being to the left and Downing House the bay to right including the rear right wing. The interior of Downing House was inspected: the front room, right (which has subsequently become part of Lawrence House with a change in the division between the two properties) has moulded ceiling cornice and an C18 moulded wooden fire surround. The house as a whole is thought to have been the Dower House to Studley Royal and was later a vicarage.