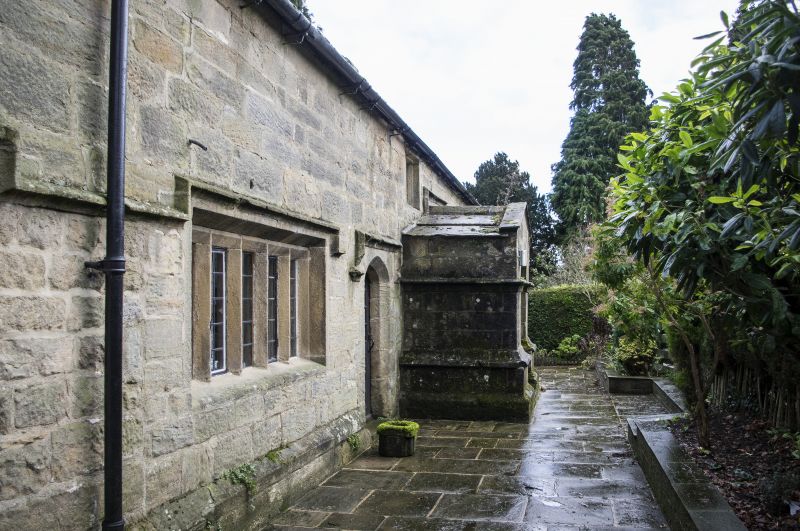 Schoolhouse and chapel range, now private house and chapel. Early C16 by
and for monks of Fountains Abbey with extension and alteration 1679 by
Samuel and Henry Taylor for Lady Yorke and restoration early-mid C19.
Ashlar and coursed squared gritstone, graduated stone slate roof. A long
south-facing range composed of single-storey, 2-bay chapel with porch at
east (right) end and 3-bay single-storey house with attic storey on left.
Chapel: plinth. Probably C19 porch reusing C16 stone for plinth and gable
coping; inner door C20 in new opening with sawn-stone lintel. The porch
overlies a 2-light recessed cavetto-moulded mullion window with 4-centred
arched heads to lights and hoodmould. 3-light window to right, two windows
of 2 lights on north side and a 3-light east window, all similar in style.
Coping and rebuilt bellcote to right gable. Relief carvings: south side -
initials M H (Marmaduke Huby) between windows; east side - 'SOLI DEO HONOR
ET GLORIA' above east window (motto of Marmaduke Huby). House: on right a
C20 glazed door in deeply chamfered surround with shallow 4-centred arch and
hoodmould. To left: two 5-light recessed-chamfered mullion windows with
continuous hoodmould. Bulbous kneeler and gable coping to left; end
stacks. Rear: the house slightly deeper than the chapel, with doorway on
left, two 2-light recessed-chamfered mullion windows centre and taller 3-
light mullioned window right. Left return: three C19 mullion windows: one a
cross window and two of 2 lights. Interior not inspected at resurvey. The
chapel belonged to a grange of Fountains Abbey of which Marmaduke Huby was
Abbot 1494-1526. In 1679 it was converted to a school and schoolhouse and
continued to be so used, with services on Sundays, into the C19. By 1894
the chapel was a gardeners store. The chapel was formerly a Scheduled Ancient
Monument.
W Grainge, Nidderdale (1893) p 54;
B Jennings, A History of Nidderdale (1967) p 103;
H Speight, Nidderdale (1894) p 452.