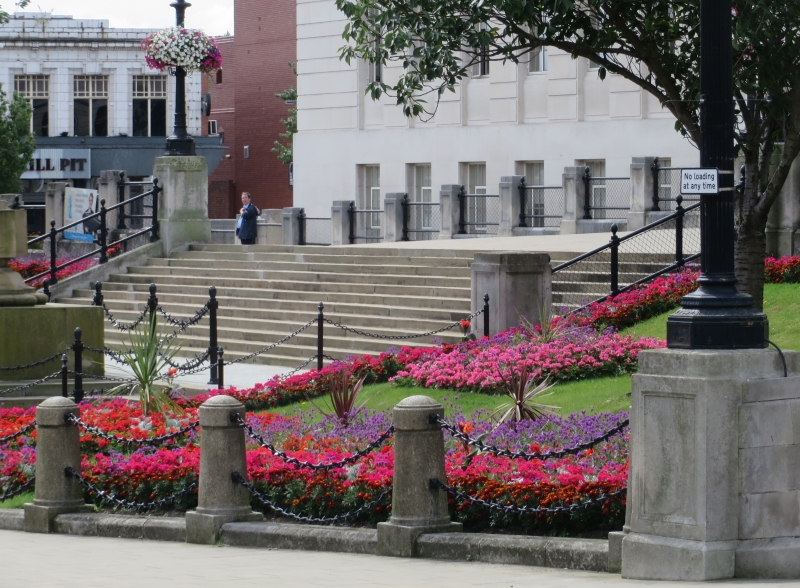 SE3406NW BARNSLEY CHURCH STREET
SE3406SW (west side),
Barnsley
8/10 Town Hall including
9/10 attached railings
GV II
Town Hall and attached railings. 1933 by Briggs and Thornely of Liverpool.
Portland stone, brick infill panels at rear. Classical style. 3 storeys
plus basement to front due to sloping ground. 21 bays by 10 bays with 2
internal courtyards. Symmetrical facade of 8, 5 and 8 bays. The central
5 bays break forward and are surmounted by a tall square tower. Rusticated
ground floor with band above. Central square-headed portal with dentilled
cornice surmounted by anthemion acroteria and a central cartouche with scroll
support. Foundation tablets to each side. A giant, Corinthian distyle in
antis loggia with clasping pilasters to each side on 1st and 2nd floors of the
central 5 bays. 3 tall round-arched windows with glazing bars to the back wall.
Iron balustrade. The single square-headed window to each side has a small cornice
on console brackets and a large panel above. Windows to other bays are 20-pane
casements, with 16 panes to the smaller 2nd-floor windows. Deep frieze and
cornice and deep parapet which is balustraded over the central 3 bays. The
3-stage reducing square tower sits on a square base with corner urns. The
1st stage has a large niche to each face, and in each is set a square-headed
window with fluted Doric colonnettes supporting a full entablature with urns.
Below the niche on the facade side is a relief of the Barnsley County Borough
coat of arms with its supporters: a miner and a glass-blower. Corner urns
surmount the 1st stage. A clock face to each side of the 2nd stage which has
a Doric entablature with anthemion acroteria. The final stage has a triple
group of slender lights, a deep, swagged frieze with acroteria and stepped
blocking courses. The rear elevation has 5 central bays with a 1st and 2nd
floor giant order of square piers and pilasters with ornamental capitals. The
centre 3 bays form a loggia whose lower part (lst floor) is infilled with tripled
windows. Other windows are casements as before. The left and right return
elevations have 8 central bays and wide corner bays which break forward slightly
and are framed at lst- and 2nd-floor levels by giant fluted Corinthian pilasters.
lst-floor windows to corner bays have cornices, the rest are 16 and 20-pane
casements as before.

Attached railings: square, Portland stone panelled piers, dwarf wall and heavy
cast-iron railings are attached at front and continue around the building. Round,
cast-iron fluted bars with square bosses, pineapple finials and round section
rails. Two fluted, ornamental lamp standards with later lamp housings, to each
side of entrance.
The Town Hall was opened by H.R.H. Edward, Prince of Wales on l4th December 1933.