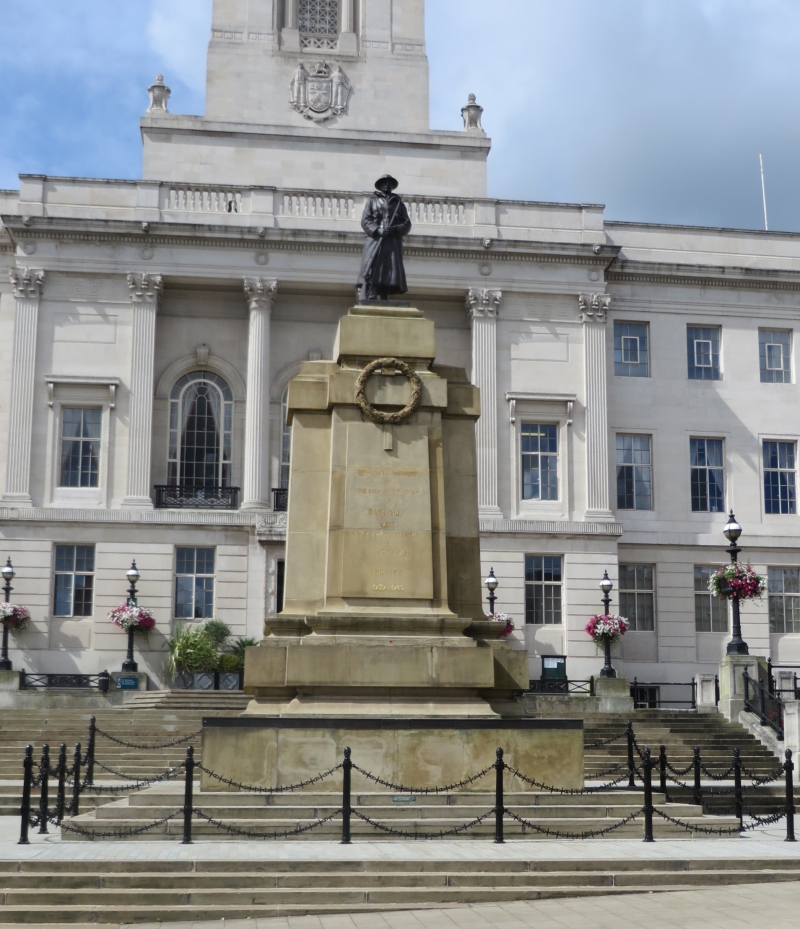 DESCRIPTION: the memorial stands in front of the Grade II-listed Town Hall that was opened in 1933, eight years after the memorial was unveiled. The memorial comprises a 2.4m tall bronze statue of a young soldier dressed in a greatcoat and wearing a steel helmet standing at ease atop a massive sandstone pylon. The pylon has a large square capstone and recessed angles, a heavy rectangular base and moulded plinth. The whole is raised on three steps on the forecourt in front of the Town Hall, rising above pavement level on Church Street. he steps at the back of the memorial have been absorbed into the 1933 re-landscaping. The total height of the memorial is c8m.

The principle dedicatory inscription on the front face of the pylon, incised and gilded, reads IN/ HONOURED MEMORY/ OF/ THE MEN AND WOMEN/ OF/ BARNSLEY/ WHO/ LAID DOWN THEIR LIVES/ IN/ THE GREAT WAR/ 1914 – 1918/ 1939 – 1945. Above this, linking the pylon and its capstone, a large wreath is carved in relief. On the left face of the pylon is carved THEIR NAME/ LIVETH FOR EVERMORE.

To the rear, facing the Town Hall, is a large bronze plaque in Art Nouveau style of a winged victory with a wreathed standard in her left hand and a shield bearing the town arms in her right. On the right face of the pylon is carved AND WE IN FAITH/ KEEP THAT PEACE/ FOR WHICH THEY PAID. Standing on top of the pylon is the 2.4m tall bronze figure of an infantryman in helmet and greatcoat standing with one foot slightly advanced, his bayonet fixed and rifle butt grounded.

The memorial is enclosed by chains suspended from metal posts around the base, which are not included in the listing.

Whilst there is no contemporary Roll of Honour, Barnsley War Memorial commemorates all those servicemen and women from the town who died during the First World War (and latterly the Second World War), and every man from the borough who served in the 5th, 13th, 14th and 15th Battalions of the York and Lancaster Regiment. The 5th was a local Territorial battalion, serving in France from 1915, and the 15th a Service battalion based from late-1916 at Blyth: whilst the 13th and 14th were the two battalions of ‘Barnsley Pals’ raised in September and November 1914 by the Mayor. These were two of 96 Pals and City battalions, units raised by private bodies and local authorities that provided the necessary clothing, billeting and food whilst the army provided weapons and training. As part of 94 Brigade in 31st Division, the Barnsley Pals saw their first action in the Somme campaign of 1916.

On the first day of the Battle of the Somme, 1 July 1916, 13th and 14th York and Lancaster were reserve battalions to the 11th York and Lancaster (Sheffield City) Battalion and the 11th East Lancashire (Accrington Pals) Battalion in the attack on Serre. The battalion war diaries indicate that the effective strength of the 13th was reduced from 720 to 280 men by the end of the day whilst the 14th lost 275 killed, missing or wounded, many before zero hour (7.30am) from German shelling. Sixteen year-old Frank Lindley of 14th Battalion recalled, “I remember seeing the lads laid in rows as if they had gone to sleep….The machine guns just laid them out. I was lying in a shell hole and could see piles of dead where they had made for gaps in the wire.”

The war memorial, designed by architect William Thomas Curtis and with sculpture by John Tweed, was unveiled on 11 October 1925 by General Sir Charles Harington and dedicated by the Dean of York, Reverend Dr Foxley Norris. Built by Messrs John Robinson and Messrs George Haigh, it cost c£5,500. In reference to contemporary experiments with road markings, Harington is reported as saying in his speech, “what I would like to see is a white line drawn on each side of every war memorial with the message ‘Slow, War Memorial’. Your safety is due to them, and don’t forget it.”

John Tweed (1869-1933) was born in Glasgow and studied part-time at Glasgow School of Art. He moved to London in 1890 and worked for Hamo Thornycroft, studying at the South London Technical Art School and the Royal Academy Schools. He studied briefly in Paris under Alexandre Falguière. In 1893 he obtained an important portraiture commission through Edwin Lutyens and Herbert Baker and in 1901 was commissioned to complete the memorial to the first Duke of Wellington in St Paul’s Cathedral, after the death of Alfred Stevens. A close friend of Rodin, he organised the exhibition of Rodin’s sculpture at Grosvenor House, London, in 1914. Following the First World War he produced many statues and monuments, a number of which are listed, including the Rifle Brigade memorial in Grosvenor Gardens, the statue of Lord Kitchener on Horse Guards, Westminster, and the statue of Sir John Moore at Shorncliffe Barracks, Folkestone.

William Thomas Curtis was County Architect of Middlesex from 1930 to 1946 and with William Howard Burchett, Assistant Architect to the Education Committee, was responsible for innovative modernist public buildings in the county, a number of which are listed including the Magistrates’ Court, Harrow, Bowes Road Library and Arnos Pool, Enfield, and Kenton Library (all Grade II).

Barnsley War Memorial, situated on Church Street, is listed at Grade II* for the following principal reasons:
* Historic interest: as an eloquent witness to the tragic impact of world events on this community, and the sacrifices it made in the conflicts of the C20;
* Architectural interest: the massiveness of the design by William Thomas Curtis is the perfect foil to the sculptural elements;
* Sculptural interest: the well-executed bronze statue of an ordinary infantryman, fully equipped for winter duty, is by John Tweed, a leading sculptor of his generation whose work includes a number of war memorials;
* Group value: with the Town Hall by Briggs and Thornely of Liverpool and with the piers railings and steps enclosing two grassed areas flanking the memorial (all Grade II-listed).