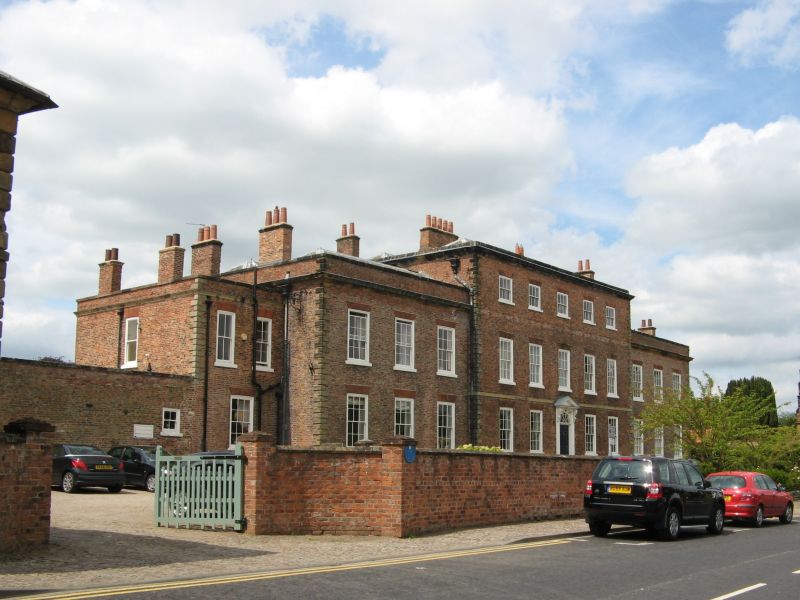 Manor House. 1720. In 1770 John Carr added the top storey and side wings. Rainwater
heads dated 1771. Reddish-brown local brick with stone dressings including chamfered
quoins, bands at floor levels (the uppermost band has recently been removed) and
cornice. Shallow hipped slate roof. To side wings, a low parapet. Central block 3
storeys, 5 bays. 2 storey side wings of 3 bays, slightly recessed. Later and lower 2
storey extension to south, set back. Central entrance approached by a flight of 6 stone
steps. Wooden doorcase of c1770 with a moulded architrave and 2 consoles supporting a
pediment which breaks through the 1st floor band. Panelled door with patterned radial
fanlight. Sash windows with glazing bars in flush moulded cases with gauged flat brick
arches and cills. The garden front has an early C19 cast iron verandah. Interior: to
the right of the entrance a room decorated in the style of 1730-40 with a beamed
ceiling with Greek Key motif which recurrs on the overmantel and doorways with
pulvinated bay-leaf friezes and dentilled cornices. The large ground floor room to the
right wing by Carr has a very fine ceiling. The first floor rooms largely retain their
C18 fireplaces and cornices. Pevsner, N., Yorkshire, North Riding, 1966, p366.
V.C.H., Yorkshire, North Riding, 1923, p57 ff.