The Mansion House and Attached Railings

A Grade I Listed Building in Town, Doncaster 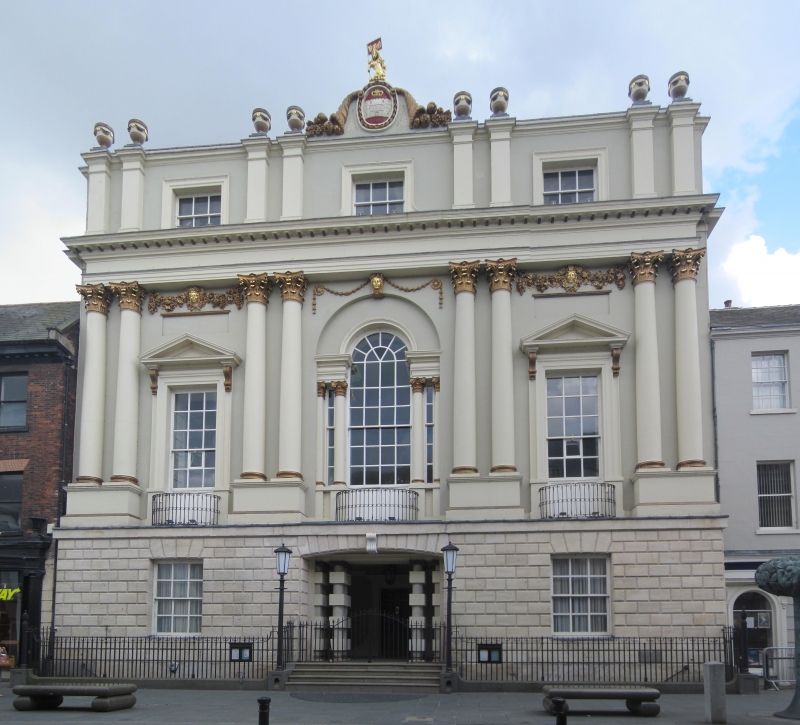 Mayorial residence and attached railings. 1746 - 1748 by James Paine with additions
by William Lindley of 1801 - 1806, including attic storey, rear landing and rear
banqueting hall. Built for Doncaster Corporation. Painted ashlar with slate roof.
Central entrance hall plan with rear staircase and small flanking rooms. Upper
floor with central staircase, full width Banqueting Hall to front, Mayoress Drawing
Room behind to left and Saloon behind to right. Jettied rear staircase landing
between and beyond Saloon to rear the new Banqueting Hall. Rear courtyard with
original kitchen range behind. Three bays, two storeys on basement, with attic
storey above and tall piano nobile to first floor. Rusticated stonework to basement
and ground floor. Basement has flight of stone steps on either side (down to
central well) and a large blind recess to either side flanking central door. To
front of basement a dwarf wall supporting railings with alternating pinnacle and
arrow-head finials; these ramp up to large end standards with urn finials. Railings
return to centre flanking four wide steps to the entrance which has segment-headed
double-leaf gates in similar style to railings. Wide segmental arched entrance
has rusticated voussoirs and moulded keystone. Within the arch are paired Tuscan
columns and pilasters to either side with massive banding and recessed behind these
is a lobby with dentilled cornice, moulded skirting and a central doorcase. This
has an 8-panel door, two lower panels flush,upper panels raised and fielded, in
shouldered architrave (which is ramped to the base) below moulded cornice. To
either side of the entrance there are.12-pane sashes below rusticated arches. Wide
band above. Piano nobile has bays articulated by paired, attached Corinthian
columns on large moulded plinths, which support entablature with plain frieze and
bracketed and panelled cornice. Central bay has full-height semi-circular headed
recess with raised keystone decorated with large carved head, laurel leaf swags
and drops hanging from moulded paterae to either side. Within the recess is an
elaborate Venetian window with Ionic columns and pilasters on deep plinths support-
ing side entablature with pulvinated friezes which in turn support moulded central
arch. Narrow five-pane sashes to sides and tall sash with radial glazing to centre.
Low panelled doors below on to semi-circular iron balcony with simple scrolled
friezes to top and bottom and frieze of circules to centre. Side bays have large
15-pane sashes in architraves set on deep plinths, and moulded pediments supported
by scrolled consoles. Below each window are low-panelled doors and to front there
are similar balconies as that to centre. Above the windows are blind rectangular
panels with simple cornices and above again there are luxuriant vine swags with
central heads encircled by leaves. Attic storey has paired pilasters articulating
the bays, each pilaster topped by a large swagged urn finial. Between there are
three 6-pane sashes in moulded architraves with eared corners to base. Moulded
cornice. Central bay surmounted by large achievement topped by rampant gilded lion,
shield flanked by cornucopia. Hipped roof. Interior has entrance hall with Ionic
screen of paired columns and pilasters, 6 panelled doors in corniced architraves,
and moulded and dentilled ceiling cornice. Mayor's Parlour to right has plasterwork
ceiling. Staircase hall to rear has fine stone Imperial staircase with alternating
paired. plain and scrolled iron balusters; Ionic columns to base of staircase
supporting landing with Corinthian columns. Upper hall has panelling to walls and
an elaborate entablature. Ceiling is deeply coved and panelled, with Baroque
plasterwork panel to centre. Landing has similar entablature, plasterwork panels
and Corinthian pilasters flanking entrance to Banqueting Hall. This room has
plasterwork ceiling with deep coving above entablature with swagged panels to frieze.
Back wall has central scroll pedimented Corinthian doorcase flanked by fine grey
marble, Ionic columned, fireplaces with pedimented doorcases beyond. Fireplaces
have rich plaster picture panels over and side entrances have overdoors. Over the
central door is a round arched minstrels gallery with bobbin balustrade. Side walls
are panelled with large central pedimented picture panels. Rich Rococo plaster
decoration throughout. Side doors lead to Saloon and Mayoress drawing room, both
with coved ceilings, original fireplaces with acanthus friezes and shouldered
architraves, dentilled corniced doorcases to Ballroom and fine cornices and ceiling
roses. The new Banqueting Hall of 1806 has corniced doorcases, entablature with
plasterwork frieze, coved ceiling with central plasterwork panels and panelled walls
with dado. Back wall has central minstrels gallery flanked by paired full-height;
Corinthian columns, and columned fireplaces to either side below plaster panels.
Delicate Classical Adam-style plasterwork decoration throughout. Rear staircase
landing also of 1806, has Venetian opening with paired Corinthian columns and
wrought iron balustrade on to staircase and similar Venetian window to rear; side
walls with shouldered doorcases. Swagged panels to frieze of entablature and cove
ceiling with central plasterwork panel. Kitchen range to rear of courtyard has
central arcade of Tuscan columns and large chamfered fireplace. Courtyard has two
Thorncliffe lamp standards, dated 1875. Sources: Country Life July 6 1978,
'Doncaster Mansion House, Yorkshire' by Peter Leach. 'History of Doncaster' by
E Miller, 1806.