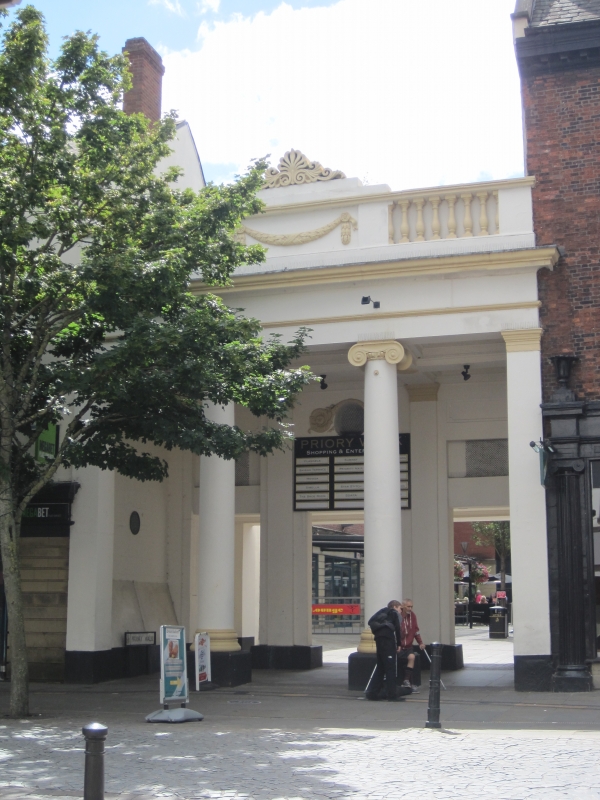 Facade to former Subscription Rooms. 1826 by Woodhead and Hurst, rooms behind
demolished c1970. Painted ashlar, concealed roof. Single bay, single tall storey.
Distyle portico in antis with pair of central Ionic columns flanked by Tuscan antae.
Plain entablature with moulded cornice. Parapet has moulded plinth and coping,
and three rectangular panels, those to sides balustraded and that to centre with
laurel leaf swag and drops hanging from moulded paterae. Above to centre anthemion
acroteria on stepped base. Within, the portico has a grid beamed ceiling with
moulded cornices. To rear wall there are three blocked openings flanked by full-
height pilasters. Recessed rectangular panels over side openings and circular
recess above central one with scrolled decoration to sides. Built as the
Subscription or Betting Rooms with 100 members paying a guinea a year. It was one
of the biggest gambling centres in the country during race week and was used for
Hazard and Roulette. After gaming became illegal, the building was used for a
variety of functions, until most of the building was demolished. Partly listed
for historical interest. Photographs of original interiors in NMR.