A Grade I Listed Building in Castlemorton, Worcestershire 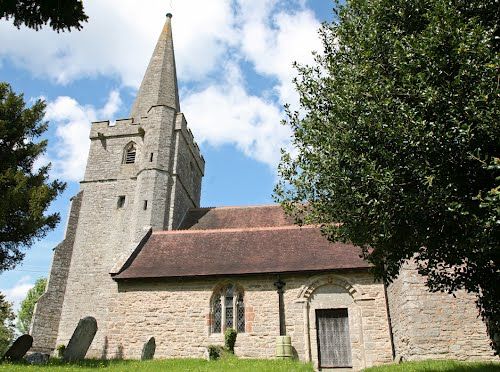 The tower has diagonal buttresses with niches and a south-east stair turret. The spire is set back behind an embattled parapet. The bell openings are each of a single trefoiled light. The west window is of three trefoiled lights under a pointed head with Perpendicular tracery. In the west wall of the aisle is a chamfered lancet window.

The timber-framed porch, to the right of the second window, is close-studded with a middle rail. The C12 doorway has a round arch with zig-zag ornament, and angle shafts with scalloped capitals: The tympanum is carved with the Agnus Dei.

The south aisle has a three-light C15 window under a pointed head: To its right is a reset doorway similar to the north doorway but with a blank tympanum.

The south chapel has a hipped roof and a three-light south window with cusped intersecting tracery: In the east wall of the chapel is a window of two trefoiled lights: On the south side of the chancel is a window of two cinquefoiled lights under a flat head, and a priest's doorway to the left: In the north wall are two narrow round-headed C12 windows, reset when the chancel was rebuilt during the C19 restoration. The east window is C19 and of three cinquefoiled lights under a pointed head.

The font has a bowl carved with acanthus foliage on an octagonal base: In the south transept is a C18 baluster font, and, in the east wall, a C13 piscina with pointed head. The communion rails have flat pierced balusters inscribed: "R H S B 1684. Robert Archer Minister. J B W B 1683".