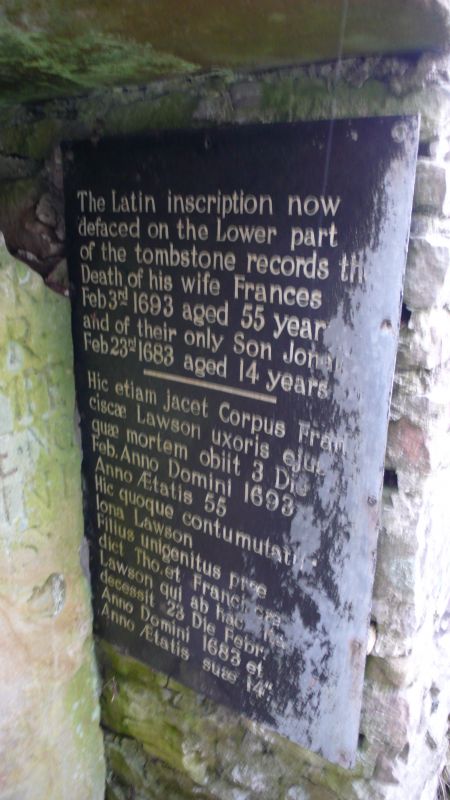 Top of chest tomb re-set against enclosure wall in lean-to shelter; originally
erected by one of Lawson's students. Inscribed stone slab; shelter formed by
coursed rubble cheeks to either side supporting stone flag over top. Slab c.4
ft high and c.2 1/2 ft wide with inscription in debased Roman capitals: SUB HOC
TUMULO JA-/GET CORPUS THOMAE/LAWSON DE MAGNA STORE-/LANDIA LUDIMAGISTER/ET
BOTANICUS NON IMPE-/RITUS QUI OBIIT 12 DIE N0-/VEMBER.: ANNO DOMINI/1691. ANNO
AETATIS/SUAE 61. Rest of inscription, recording Frances his wife and Jonah his
son, is weathered. Thomas Lawson (1630-1691) appears in the Dictionary of
National Biography (XXXII, 297); he was said to be the most noted herbalist in
England of his time with several English plants first being described by him and
one, Hieracium Lawsonii, named after him. Graded for historical interest.