A Grade I Listed Building in Laneast, Cornwall 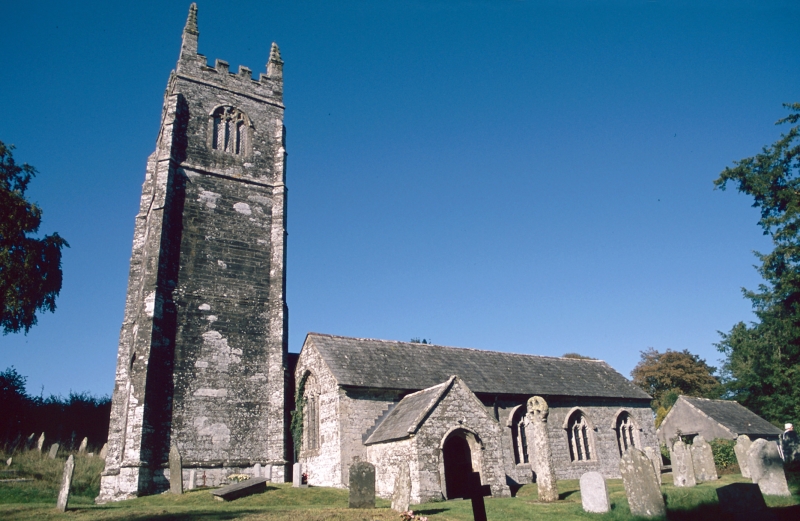 Parish church. C12; C14 west tower, raised in C15 with C15 south aisle and south porch. Some C19 restoration. Slatestone and granite rubble with granite dressings. The tower is in squared slatestone rubble; the south aisle and south porch in squared granite rubble. Slate roofs with ridge tiles and gable ends.
Plan: The original C12 church would have been cruciform, with nave and chancel in one and transepts to north and south. The north transept remains. In C14, the west tower was added, its third stage of the C15. In circa mid C15, the south aisle with south porch were added.
Exterior: Of the nave, only the north side is visible; this has no plinth; one 3-light window, possibly C16-C17, of 3 lights, with chamfered mullions and surround, hollow-chamfered internally, with square head. The chancel is in slatestone rubble with granite quoins. The east end has 3-light C19 Perpendicular window, with cusped lights, 4-centred arch and hood mould. To south there is a 2-light C19 window, with cusped lights, square head and hood mould.To north a single chamfered lancet. The north transept is also in slatestone rubble with granite quoins; no plinth. The north gable end has 3-light window, possibly C14, with three 2-centred arched chamfered lights, the central light taller. To east is a 3-centred arch chamfered single light. The west tower is in three stages on moulded plinth, with diagonal weathered buttresses and moulded string courses; embattled parapet with crocketed pinnacles. 2-centred arched west doorway with moulded surround and two engaged shafts to each side; C17 studded plank door with strap hinges; hood mould and relieving arch. C15 3-light Perpendicular west window with cusped lights, 4-centred arch, hood mould and relieving arch.The third stage has C15 3-light Perpendicular bell-openings with cusped lights, 4-centred arches and hood moulds with pierced wooden louvres. Quatrefoil and lancets to north for the stair.The south aisle is of 5 bays on hollow-chamfered plinth; the porch in the bay to west. At the east end is a 3-light C19 Perpendicular window with cusped lights, 4- centred arch and hood mould. The west end has similar C15 Perpendicular window with some C19 restoration to the mullions. The south side has four C15 Perpendicular 3-light windows, with 4-centred arches and hood moulds, some C19 repair to mullions. Gabled south porch on plinth which is continuous with the aisle plinth; moulded raised coped verges to the gable. Outer doorway with 4-centred arch with convex and
concave mouldings and hood mould; C19 cast iron gate with spear finials. The interior of the porch has slate floor and C15 wagon roof with carved wall-plates and bosses and ribs; unceiled. On the right wall is a slate tablet to John and Katherine, with verses, 1696. Inner doorway has wave-moulded surround with 4-centred arch with hollow-moulding, recessed spandrels with carved leaves; fine C17 studded door with fleur de lys strap hinges and sanctuary knocker. Image niche above. Interior: Plastered walls and slate-paved floors. The nave and chancel are roofed in one, with unceiled wagon roof, of circa early C19, with moulded ribs and wall-plates, and carved bosses; the bosses in the chancel are re-set C15, of high quality carving. The south aisle has C15 wagon roof with carved bosses and wall-plates and moulded ribs. The north transept has C19 common rafter roof. The tower arch is 4-centred, with triple shafts with carved capitals and bases; C19 wooden screen across, incorporating panels of C15 carving. 2-centred arched doorway to the tower stair with C17 studded plank door with fleur-de-lys strap hinges. There is a wide moulded 4-centred arch to the north transept. 5-bay south arcade, with Pevsner A-type piers with carved capitals, 4-centred arches with convex mouldings. The chancel has C19 aumbry and piscina, with C19 carved wooden reredos in Gothic style; the east window has nook shafts. The south aisle has C15 piscina with 4-centred arch and similar holy water stoup by the south door.
Fittings: Fine C12 stone font in the nave, of Altarnun type; square bowl with faces at the corners and stylised 6-petalled flowers in circles on the four sides; central octagonal stem. In the nave and aisle a good set of C15 bench ends, carved with interlaced knots, stars, shields of arms and a green man, and symbols of the Passion. C15 rood screen with Perpendicular style carved panels and tracery; some C19 repair. C19 carved wooden pulpit and reader's desk, in the nave, incorporating some panels of C15 carving. The nave has C19 coat hooks on the north wall. In the north transept a wooden chest with fine ironwork straps, and a 5-panelled screen, circa C18, in painted leather in Chinoiserie style, with birds and trees etc, the back with plain painted panels, said to have come from Tregeare House (q.v.). C19 communion rail in chancel, in Gothic style. C18 alms box in south aisle, with carved oak leaves. C17 stocks in south porch. Monuments in chancel: slate ledger stone to John Squier of High Hall, 1694. In nave: a marble monument to John Couch Adams, who discovered the planet Neptune; born at Lidcott in Laneast parish, died 1892. In north transept: slate monument with marble surround and Gothic lettering, to William Edgecombe, 1679, with verses entitled "the mother's valediction"; slate monument with marble surround, unidentifiable, probably also late C17. Glass: the east window of the chancel and the south windows in the aisle retain fragments of C15 glass, with Christ crucified, St Christopher and St Catherine and instruments of the Passion. The east window in the south aisle has late C19 stained glass with the Virgin and Child, St George and St Sativola (the Latin rendering of St Sidwell). She is shown with her symbol, the scythe; St Sidwell is the patron saint of reapers, as her head was cut off with a scythe.
Sources: Pevsner, N.: Buildings of England: Cornwall (1970).