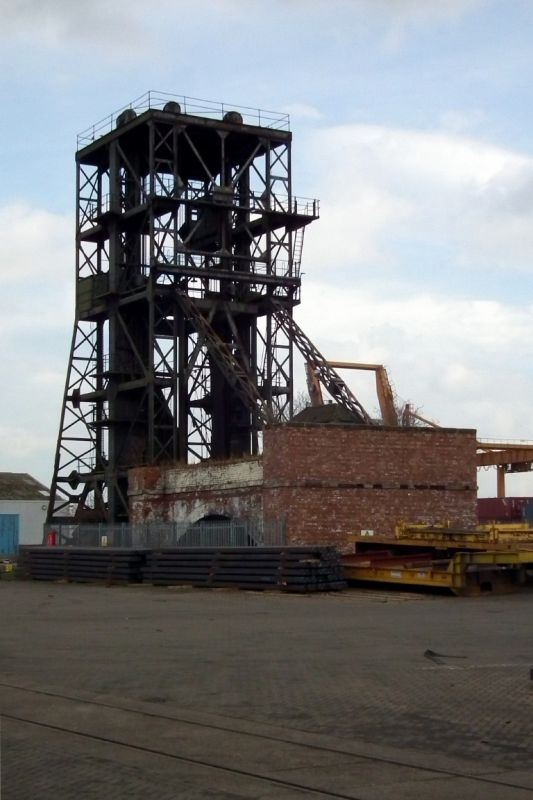 A coal wagon hoist of 1906 constructed by Tannett Walker & Co. of Leeds for the Lancashire and Yorkshire Railway.

MATERIALS: Steel with wooden platforms. The viaduct is of brick with sandstone dressings, while cabins are of timber.

PLAN: The hoist sits on the western edge of Railway Dock and is rectangular plan, with the viaduct approaching from the west.

EXTERIOR: The hoist comprises a five-storey tower with a central well of riveted lattice construction with a flat roof. There are staircases with wooden landings to each stage. The tower is supported to the west by angled girder buttresses. The hydraulic wagon lifting mechanisms are housed in casings on the north and south sides.

The bottom stage, with C20 concrete underpinning, has timber decking and a riveted sheet iron covered walkway. The approach ramp and wagon platform with hinged coal chute is sited to the second stage. There is a wooden control cabin to the top stage, and a series of cable pulleys on the roof. The ramp has a modern masonry buttress to the west.

The surviving section of the viaduct incorporates one segmental arch, with double wooden doors to the south. Adjacent to the hoist, on the south side of the viaduct, there is a single-storey timber cabin with tongue and groove boarded walls and a hipped slate roof. The door is of wood plank; windows are multi-paned with one casement and a pair of sliding sash windows.

The hoist was built in 1906 by Tannett Walker & Co. of Leeds for the Lancashire and Yorkshire Railway, replacing an earlier structure known as the coal drop. The approach viaduct was constructed by Dransfield & Co. The hoist had a maximum operating load of 60 tons (later de-rated to 40 tons) and was last used on 7 December 1978 to load the MV Per Knut with 46 wagons of coal from Grimethorpe Colliery.

It originally had an inclined viaduct comprising six segmental arches, carrying standard gauge railway lines inclined at contrasting angles. This once extended to the east abutment of the Bridge Street rail bridge (dismantled). Loaded coal wagons were first propelled towards the hoist up the northern track by locomotives, then hauled individually using hydraulic capstans and rope, to the level of the hoist lifting cradle. At the head of the incline there was a turntable, used for aligning wagons to a particular orientation. Beyond the turntable there was a length of horizontal track where loaded wagons were held before tipping; the north and south tracks converged at a set of points between the holding track and the hoist. An iron or steel cradle, carrying a single rail, was used to raise and lower wagons in a shaft within the centre of the tower. At the required height a cable and pulley system tilted the cradle and the loaded wagon on end. The force of gravity discharged the coal into an iron chute and down to a vessel moored alongside. Empty wagons were hoisted back onto the south track of the viaduct where they ran back using gravity, on an incline which began immediately west of the points.

The coal wagon hoist, adjoining railway approach ramp and control boxes were listed at Grade II on 15 September 1987. In 2004, Listed Building Consent was granted for the demolition of five of the brick arches which formed the viaduct, leaving only the easternmost in-situ. The adjoining buildings to the ramp, excluded from the listing, were also demolished.

The coal wagon hoist, adjoining railway approach and control boxes are designated at Grade II for the following principal reasons:
* Historic Interest: it is a good example of a building type which represents the significance of the coal trade to the economy of Goole, and in turn the country as a whole
* Rarity: it is one of the few surviving hoists in the country with original hydraulic gear still intact