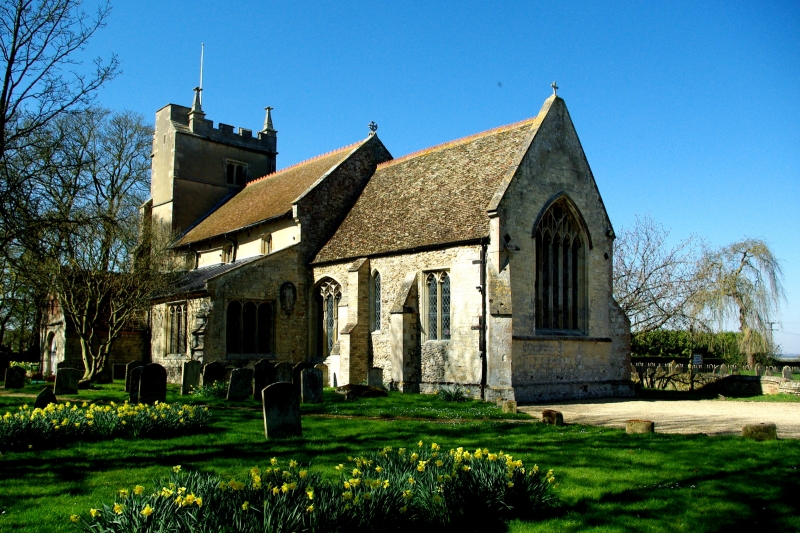 Small parish church on edge of the village. Mainly C14, but the
chancel is C13 and the clerestorey C15. Clunch and flint with
Barnack dressings. Tiled roofs. West tower of three stages
with embattled parapet, the corners with panelled pinnacles
surmounted by pyramidal finials. Three stage buttressing and a
newel staircase in south east corner. Nave with C15
clerestorey, each side having three windows of two trefoil
lights. The south aisle has three C14 windows, all restored in
C19, and a window at the east end which has the original clunch
tracery. Three cinquefoil lights in a square head. South
porch, also C14. Wheel cross above a later sundial at the gable
end. Depressed outer arch, chamfered. The inner arch is two-
centred and has a continuous roll moulding. Chancel, C13, but
the south wall has been extensively repaired. Fenestration is
C14, restored, except for one C13 lancet in north wall. The
north doorway is C13, reset. Of two orders, the outer arch
moulded and carried on engaged shafts. The inner order is
chamfered. Inside, the wall material is clunch. The tower
arch, nave arcade, and chancel arch have similar C14 nave
moulding in two-centred arches. The nave is in three bays and
the arches are in two orders on octagonal columns with moulded
capitals and bases. The roof is C15, probably the same date as
the clerestorey, and in three bays. It is of collar rafter
construction. The cambered tie beams are carried on wall-posts
and mask corbels. Monument. Marble slab in chancel to Henry
Cromwell, 1673, and Elizabeth, his wife, 1687 and Henry, his
son, 1692. Brasses. Margaret Peyton, 1414 and John Peyton,
1520. Outside on east wall of south aisle, wall monument to
William Drage, 1728. Three stalls in chancel with misericords
carved on the underside, one with female head, and two with
enriched scrolls. In vestry, coffin lid, with omega ornament,
mediaeval.
Pevsner: Buildings of England, p.485.
RCHM: Record Card.