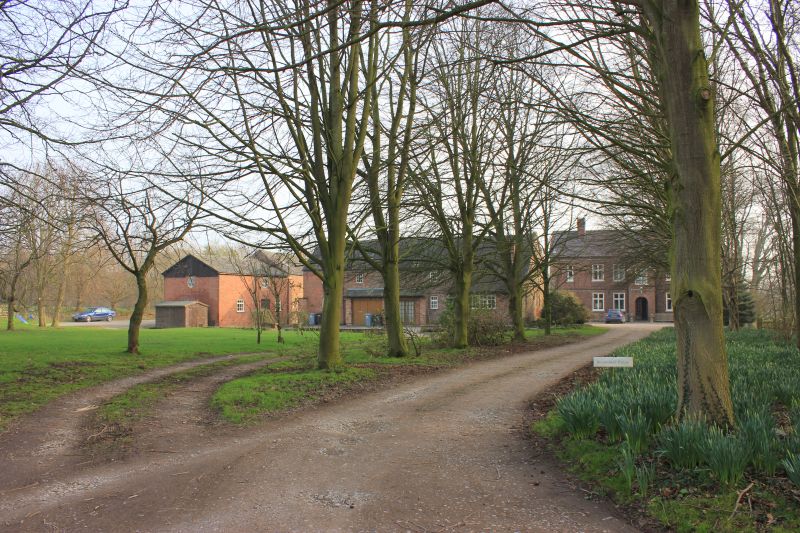 Small country house. Late C17. Red Flemish bond brick and coursed
rubble with ashlar dressings, with a slate roof. Two storeys with
attic. The entrance front is of 6 bays, the five at right
symmetrically disposed but all built at one time. The porch wing is
at right of centre and has a round archway to the ground floor with
brick voussoirs and keystone, above which is a flat hood-mould. To the
first floor is a cross-window with a cambered head of C19 brick. To
either side of the porch and in a sunken area is the basement which
has walling of coursed rubble with ashlar quoins to the corners. The
basement windows have chamfered ashlar surrounds with mullions and are
of two lights save at far left where the window is of single-light
form. Ashlar string-course dividing the basement from the first floor
and others dividing the ground from the first and the first from the
attic floors. These continue around the building and there are ashlar
quoins to the four corners. The ground floor has cross windows at
left and right of the porch with a single-light window to the far
left. The first floor is similar. Ridge chimney stack to left of
centre. The right hand gable end has a massive chimney stack to the
centre with a battered lower body which dies via offset to a
rectangular body with ashlar quoins to the corners. The top courses
and flues are of C19 Ruabon brick with a cogged band. To left of this
stack are a ground and first floor window opening, now blocked, with a
single light basement window with a chamfered ashlar surround.
Interior: Within the porch is a plank door with coffin-nail
decoration and incised strap hinges. The central hallway has a closed
string staircase of 5 flights, that leading to the basement having
elaborately carved and pierced splat balusters and a moulded handrail.
The remaining four flights all have spiral twist balusters and newel
posts with a moulded handrail and moulded facing boards to the treads.
The top landing has splat balusters of waved outline. To the ground
floor at either side of the hallway are 2 sets of double doors each
having 2 bolection-moulded panels and one having a panelled door
surround with Ionic capitals. The ground floor rooms have
ovolo-moulded ceiling beams with ogee end-stops.