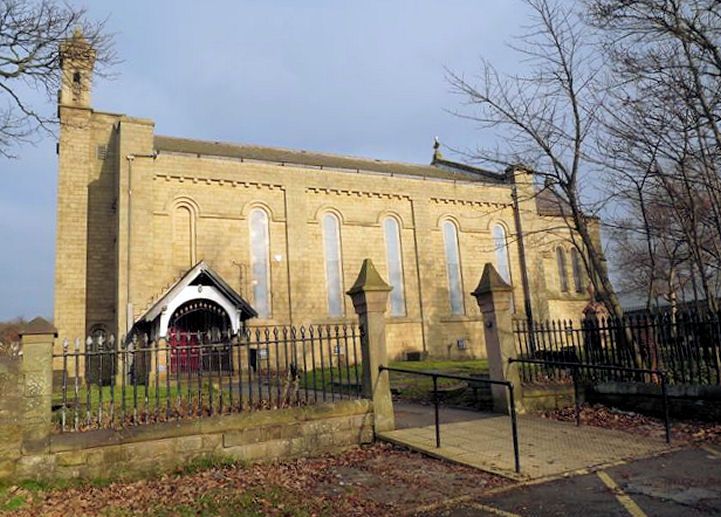 Church of 1840 for the Church Commissioners by Hayley and Brown of Manchester, with chancel of 1877 by J. M. and H. Taylor of Manchester. Built in an Italian Romanesque style

EXTERIOR: The elevations rise from a low projecting plinth. The West end has a
shallow central tower with Romanesque recessed portal at the base, surmounted by 3 windows, the central one glazed, and with a circular bell louvre above. Square
turrets rise the full height of the tower and are surmounted by canopies with
pyramidal roofs, which flank a small central pediment. To either side of the tower are paired windows one above the other. Windows are semi-circular arch headed with set back surrounds. A square string course runs at the level of the base of the window head and continues over each window. The upper courses of stonework project with a dentil corbel course. These arrangements continue on the secondary elevations,which are separated from the western elevation by square corner turrets which rise to the gable parapet of the pitched roof.

The nave is of three bays, divided by vertical lesenes. The westernmost bays contain a blind window above a doorway, and one tall window, while the other 2 bays have paired tall windows. A square sill band continues over the arched door opening. The south doorway has a porch of pitched timber and slate roof on low stone walls. There is a small gallery window with projecting hood mould in the returns between the nave and chancel. The chancel has shallow buttresses with weatherings, in the angle with the nave and between the two bays. Each bay contains paired tall windows with splayed reveals, under a uniting hood moulding with pendant stops and with a sill band. The East wall is gabled, with three windows, the central one taller and each with projecting hood mould, and with a sill band. The organ loft is in the North angle of nave and chancel, gabled and with two tall windows, while to the East the vestry projects North from the Chancel under a catslide roof.

INTERIOR: The roof is of trusses with a collar and King post, and tie beam with Queen struts. The interior is ceiled and plastered. Raked wooden galleries supported on slender quatrefoil cast iron columns around three sides of the nave retain box seating. The nave has wooden pews fixed to a low platform with a central aisle. The chancel is separated from the nave by a semi-circular arch with a plain moulding supported by short Tuscan columns resting on stone corbels. The chancel is accessed through a low stone balustrade of colonettes, via central iron gates and steps up. The chancel has fixed wooden choir benches and a good tile mosaic floor, with the organ by Ashworths in the organ loft. The sanctuary is raised with a wooden altar rail, and was carpeted at the time of inspection.

The sanctuary has north and south paired arched niches with a central colonette with ornamental capital, the eastern arches containing piscina & sedilia to north and south respectively. Similar arches on the east wall contain smaller paired semi-circular arches with a central colonette with ornamental capital, and flank the reredos. This is contained within a taller niche of a semi-circular arch under a pediment, and supported by barley-sugar colonettes with ornamental capitals. The reredos has a circular mosaic panel of gold tesserae with a stone cross, and similar panels in the tympana of the east wall niches contain, to the north, the letters IHS, and to the south an Alpha and Omega.

Responds with shaft rings rise to the full height of the east wall, separating the central very tall window from a similar but shorter window on either side, all in deep reveals. The jambs of these flanking windows also have responds with shaft rings and ornamental capitals. All three windows have stepped recessed semi-circular arched mouldings. The paired windows in the south elevation of the chancel have mullions with a respond with shaft rings and pyramidal capital, and the arch heads have set back surrounds with pendant pyramidal stops.

Most of the glazed windows in the church contain stained glass, some signed by George Cooper-Abbs and Cox & Edgley, many with dedications and all of good quality. A tall wooden font cover and wooden lectern were presented to the church on the opening of the new Chancel in 1877. Other fixtures include a stone font and pulpit, wooden lectern, and various memorial tablets. In particular a monument to benefactors James and John Ashton, 1844 by Knowles, is of unusual design. The architectural interest of the building is enhanced by the good survival of minor fittings, such as the hoops and trays for storing umbrellas on the ends of pews, and original iron door furniture. The single bell in the tower is dated 1932 and is by Taylors of Loughborough.

HISTORY:
A tablet on the east wall of the nave records that the land for the church was given by John Ashton (1800-1844), a member of a local mill-owning family noted for keeping its mills open during the cotton famine. Another tablet beneath the west gallery states that the erection of the church was chiefly due to the efforts of Rev. William Johnson, who died in 1840. An online archive records the dates from design to building as 1836-40. This is also supported by evidence including a jug presented to the church and dated 1839. A second tablet below the west gallery records that the current chancel, vestry, organ chamber, south porch and west entrance were begun in 1876 and consecrated in 1877 by William Jacobson, the Lord Bishop of Chester, having cost £2,800 by public subscription.

Minor changes to the layout of the nave might have been coincidental with the new
chancel; the font and some seats were formerly in the central aisle, and matching
wooden pulpits on either side of the central aisle do not survive. Map evidence
suggests that the extension of the graveyard to the north took place between 1898 and 1910.
In the late C20 the western entrance lobby has become a narthex, with a small wood and glass screen just extending under the centre of the western gallery. A toilet has been inserted at the base of the north gallery stair, and an external ramp provides level access to the north door. These items are of lesser interest. At the time of inspection the church was still in regular use by a thriving Anglican congregation.

* This mid C19 Commissioners' church is a thoughtful design by Hayley and Brown of Manchester of added architectural interest due to its Romanesque style, rather than the Gothic which was more commonly used for these buildings.

* Overall the architecture of later additions by J. M. and H. Taylor of
Manchester is sympathetic to the original design and style, of similarly good quality and with more decorative detail, and contributes to the architectural interest.

* The Commissioners' churches are of historical interest as the largest ever state-funded wave of church building in England, and the single largest initiative since the Reformation. The good level of survival of interior elements including fixed pews and galleries with box seating allows the original purpose of the building, to accommodate large numbers, to be read.

* The addition of the larger chancel in 1877 is of historical interest as this illustrates changes in liturgical thinking since the church was built, with a reduced emphasis on sermons in favour of the Eucharist.