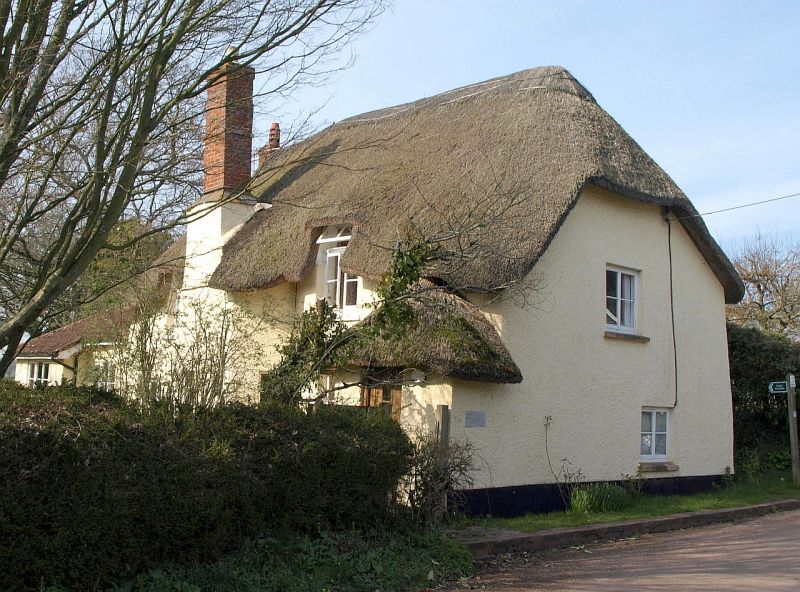 Small farmhouse. Late C16 - early C17, some C18 alterations, C20 extension.
Plastered cob or stone rubble footings; cob stacks topped with C20 brick; thatch
roof to main house, tile to C20 extension.
Plan: 3-room plan house facing south-west. At the right (south-east) end is a
small unheated inner room. Next to it is the hall with a projecting front lateral
stack built of cob. The left room nas a projecting gable-end stack. This left room
probably occupies the site of a through-passage and small service end room but it
was converted to a parlour in the C18 with a new stack. The rest of the house
appears to be a single phase late C16 - early C17 house and the hall seems to have
been floored over from the beginning. 2 storeys with a C20 single storey extension
on the left end.
Exterior: irregular 2-window front of C19 and C20 casements with glazing bars, the
first floor windows are half dormers. A third window has been knocked through the
hall stack. The doorway left of centre was probably the passage front doorway; it
contains a C20 door. Secondary doorway at the right end also contains a C20 door
behind a contemporary thatch roofed porch. The main roof is tall and steeply
pitched and it is half-hipped both ends.
Interior: the former inner room ceiling is made up of plain joists, probably not
the originals. The hall has a chamfered axial beam with pyramid stops. The
fireplace here is plastered and its oak lintel is also chamfered with pyramid stops.
The third room has no carpentry detail and the fireplace is C18, brick with a
roughly-finished oak lintel. The crosswalls either end of the hall are original
oak-framed closed trusses. The hall roof is a single bay between the crosswalls.
Penspool Cottage is an interesting house. Few houses this small survive from the
late C16 - early C17 in Devon. It also forms part of an attractive group of listed.
buildings in the vicinity of Pencepool Farmhouse (q.v).