A Grade I Listed Building in Plymtree, Devon 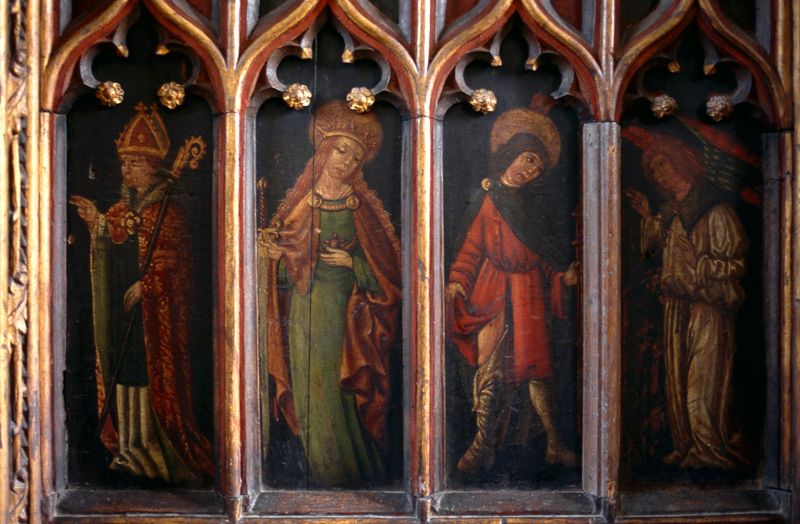 Parish church. C15 in more than one phase, some late C17 modernisation, renovated
in 1893. Local red sandstone and volcanic stone rubble with volcanic ashlar quoins;
Beerstone and replacement Hamstone ashlar detail; slate roof.
Plan: nave with narrower chancel. The south aisle is not quite full length. West
tower and south porch.
Exterior: tall west tower of 3 stages with diagonal buttresses and embattled
parapet witn crocketted corner pinnacles and carved gargoyles. Semi-hexagonal stair
turret on south side rises only through 2 stages; it has a parapet of open
quatrefoils with crocketted pinnacles. Large 2-light belfry windows with
Perpendicular tracery. On the west side there is a 2-centred arch doorway with
moulded surround and above it a 3-light window with Perpendicular tracery; both have
plain hoods. High in the tower this side is a large niche with moulded surround and
crocketted canopy. It contains a carved representation of the Virgin and Child; it
is very worn but appears to be C17. The south aisle has diagonal buttresses. The
windows each end were renewed in the late C17; they have reused Gothic tracery and
they are set in the late C17 brick. The south side is 5 bays. The porch is left of
centre. It has a parapet carved with quatrefoil panels and enriched with carved
shields and 4-leaf motifs. The outer arch is 2-centred with moulded surround
including a band of 4-leaf motifs and the label stops of the hoodmould are carved as
angels with shields. Inside the porch has a C19 ceiling. The south doorway is a 2-
centred arch of volcanic stone with moulded surround and it contains an ancient
studded plank door. There are remains of a stone stoup alongside. The south aisle
windows are 3 lights with Perpendicular tracery and carved human head label stops to
the hoodmoulds. In the chancel the windows to north and south are C19, square-
headed with cusped tracery, the southern one distinguished by carved human head
label stops to the hoodmoulds. The east window is 3 lights with Perpendicular
tracery. On the north side the break between nave and chancel is marked by a
projecting rood stair turret. This side the nave has 3 tall C16 windows, square-
headed and each has slightly different shaped heads, elliptical and Tudor arch
heads. They are separated by large buttresses with weathered offsets.
Interior is very good: both the nave and aisle have late C17 or C18 plaster vaults,
both with moulded cornices but the nave is distinguished by a dentil frieze and,
towards the chancel the nave ceiling includes an ornamental section, a ceilure of
octagonal panels with bosses like ceiling roses. The chancel roof is a ceiled wagon
roof with moulded ribs and purlins and bosses all carved as the Green Man. It is
painted and therefore it is not clear how much of it, if any, is C15. Tall tower
arch is Beerstone ashlar and panelled with moulded surround. Plain plastered
chancel arch. 5-bay Beerstone arcade to the aisle, one overlapping the chancel.
The moulded piers are Pevsner's type B with carved foliage caps. Two of the nave
piers include the remains of a small image niches. The pier between nave and
chancel is wider than the others and incorporates a Tudor arch-headed hagioscope.
On the northern side of the chancel arch and facing the nave is the remains of an
image niche for which the rood screen makes provision. Its surround is richly
carved. The rood stair close by has been reopened in the C20 and the doorways
rebuilt. There is the remains of yet another image niche to the south chapel. The
rear arches of the nave windows have moulded plaster hoodmoulds. The floor is
flagged and the aisle includes a couple of good C17 graveslabs. Plastered walls.
Rood screen: is a splendid example. Carved oak, 9 bays, with panelled
wainscotting, Perpendicular window tracery (Pevsner's type A), Gothic tracery in the
coving, and frieze of 3 bands of undercut delicate foliage with a vallance. Also
the screen is painted with ancient colour, the wainscotting scheme is a remarkable
survival. All 34 panels are painted with a different figure, mostly saints but some
New Testament figures, a bishop and a royal scene (see church guide).
Furniture and fittings: sanctuary is lined with restored late C17 linenfold
panelled wainscotting including a frieze of maybe Flemish carved classical female
figures. Late C17 oak altar rail with turned balusters and cherubs and garland
carved onto the main posts. C19 oak stalls with poppyhead finials and reusing some
good C15 carved oak bench ends. C18 fielded panel pulpit and late C19 Gothic
lectern. Very good and complete set of C15 oak benches; blind tracery on the
frontals and back benches, ends carved with similar schemes of flowers and 2 tiers
of tracery. The only additions a couple of late C17 benches and one C19 example.
C15 Beerstone font; octagonal bowl with quatrefoil panels, carved foliage base and
panelled stem. C17 oak ogee-profile font;cover complete with carved bird on the
apex.
Memorials: are small, C19 in date and of local interest only. Good carved
alabaster panel in south aisle represents the Resurrection of Jesus. At the back of
the aisle C16 nowy-headed Prayer and Commandment boards and tower includes painted
arms of George II.
Glass: good deal of early painted and stained glass in the window tracery and some
bottle glass in the south aisle. The nave windows are for the most part diamond
leaded panes of old clear glass and the centre window includes some patterned yellow
grisaille glass.
The Church of St John is a particularly good and well-preserved example; perhaps the
paradigm of a rural parish church in Devon it has escaped the worst excesses of C19
renovation and includes fine craftmanship from the C15 onwards. The painted figures
on the screen wainscotting are a remarkable survival.
Sources: Church Guide.