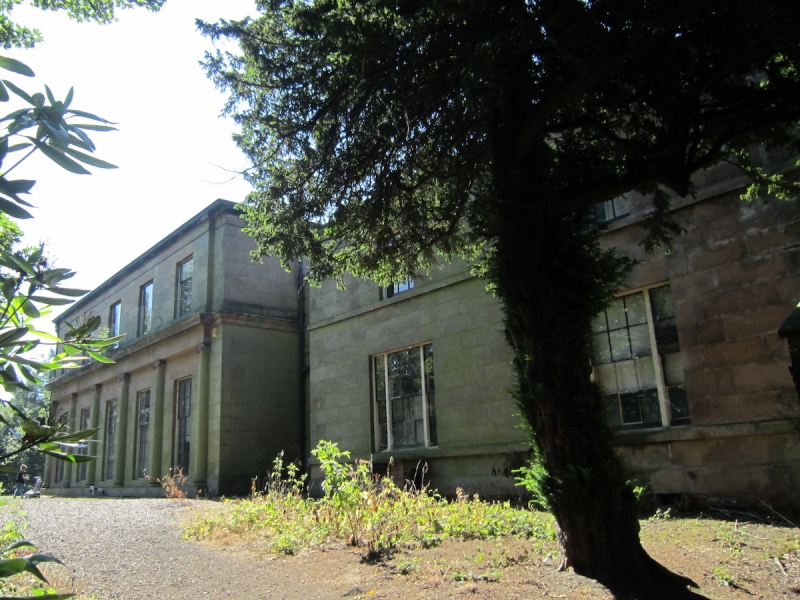 SUBSIDIARY ITEMS: Greek Revival drive entrance portico on west side of grounds; sandstone ashlar in form of distyle in antis portico, with two fluted columns supporting an architrave set between square flanking pilasters. Iron fencing between columns and pilasters, with pedestrian entrance through centre of columns. Sans serif bronze lettering spelling WOODBANK MEMORIAL PARK fixed to frieze, possibly dating from the 1930s. Matching half of entrance, on opposite side of drive, is missing.

HISTORY: Thomas Harrison was a leading Greek revivalist, pioneering baseless Doric and a simplified Ionic order. He designed a great range of building types, and domestic architecture was a small, but important part of his practice. It is likely that he also designed the entrance portico. Peter Marsland, for whom the villa was built, was a major cotton manufacturer, who owned Park Mills in Stockport. In 1921, Sir Thomas Rowbotham J.P. bought the house and grounds and presented it to Stockport as a First World War memorial. The house opened as a museum in 1931. The grounds are still used as a public park, but the house is not presently open.

REASONS FOR DESIGNATION
Woodbank is designated at Grade II* for the following principal reasons:
* It is a highly refined early C19 Greek revival villa by Thomas Harrison, an architect of national renown who pioneered a severe Greek Revival style for both public and domestic commissions
* The building uses high-quality craftsmanship and materials to enhance the visual simplicity and purity of the design
* The interior contains high-quality plasterwork, fixtures and fittings, such as a fine cantilevered marble staircase, doors, architraves, fireplaces, and numerous relief wall panels with classical themes to compliment the Greek revival style of the architecture.