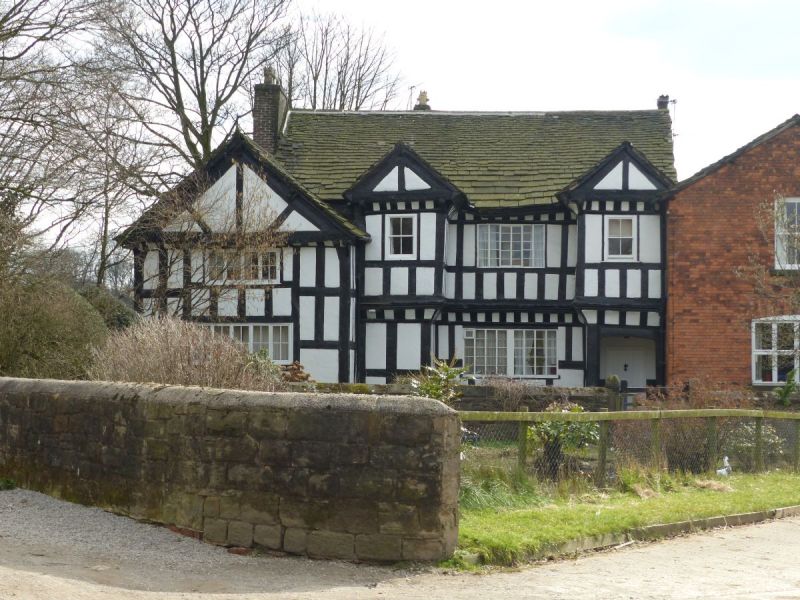 House. c.1570 for Randle Davenport but with alterations and
rebuilding of c.1860 by R. Horsefield. Timber-framed with
dressed stone rear, Flemish bond brick wing and roofs of
slate and stone slate. H-shaped house with 2 storeys
throughout and 2-storey porch and symmetrically
corresponding projecting bay: former cross-passage open to
house-part. Stone plinth and coved jetty and eaves to house-
part and same to projecting porch (right) and left bays
which have jettied gables with enriched bressumer beams
including the initials R and D. Porch has 4-centred arch
doorway. Left crosswing has zig-zag enriched bressumer.
Right crosswing of c.1860 replaces a timber-framed wing of 1
storey. Windows are later casements or Victorian sashes.
Rear has scattered fenestration, stone quoins and formerly
had an external stack to the house-part. The interior has
lost its main features but retains chamfered beams with
stepped stops and diagonal struts. C19 walls were inserted
to break up the large spaces. A fine example of a large C16
Cheshire vernacular house.