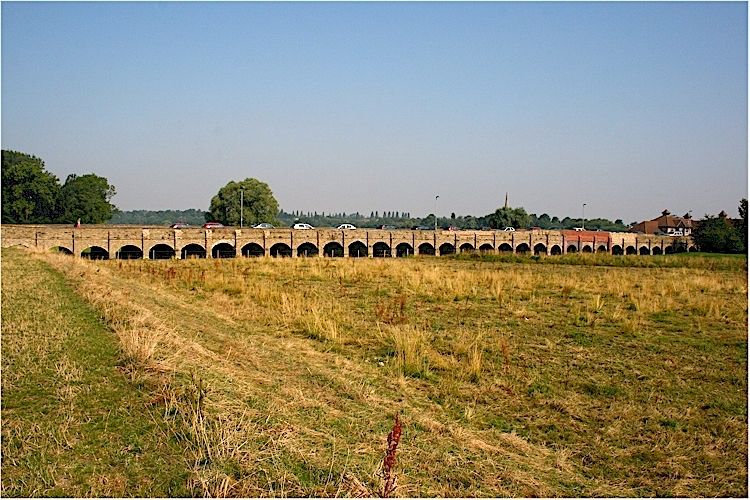 HISTORY:
Recent research has shown that the bridges were built by the Bury-Stratton Turnpike Trust although the causeway was owned by the Duke of Manchester. After the necessary loan was paid off the bridges too would become the property of the Duke. One of the trustees, John Margetts, offered a loan of £5,000 at 5% to cover all the costs, and he also provided all the bricks from his local brickworks. The architect was most probably Thomas Gwyn Elger of Bedford and William Biggs was the surveyor. The master builder appears to have been John Turner. Work began on April 8th 1822 and the 55 arches were completed in a remarkable 23 weeks. Around 1, 250 000 bricks were used. The causeway is some 700 feet long, and although there was some strengthening of a few arches when the railway was constructed across it in 1847, employing a level crossing, the causeway has only been repaired rather than widened, and much of the stone coping survives.

SUMMARY OF IMPORTANCE:
This 55 arched, single structure is a unique causeway in the UK in that it is the longest road causeway with the greatest number of continuous brick arches. It predates the brick viaducts of the railway era and is a very significant example of 'Turnpike archaeology', and was considered to be important by the engineer Thomas Telford who visited in 1826. A comparison with other causeways shows that the New Bridges is much more extensive in a single stretch and much less altered than other comparable examples.