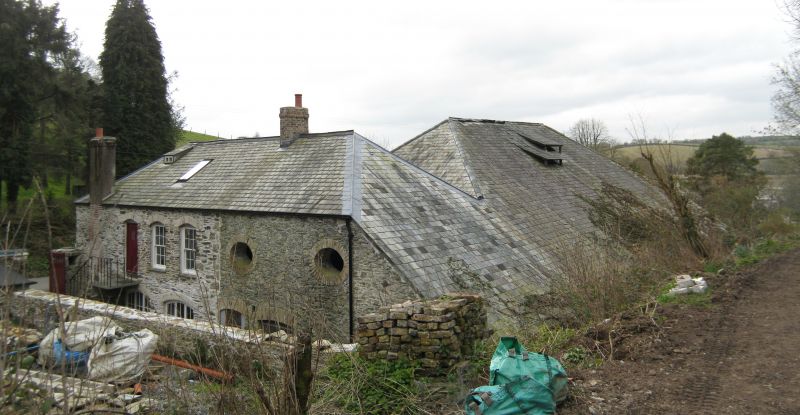 PLAN: a large single-storey smelting works with a two-storey assay office to the east and two-storey ore store and accommodation to the west, forming a U-shaped arrangement.

EXTERIOR: the SMELTING HOUSE is a double-height building with an expansive hipped roof. Originally this roof would have had two large chimneys in the centre which are no longer extant. A cobbled yard leads to the west elevation which has a large brick archway, an oval brick opening above, and square windows which are now boarded up. On either side of the archway opening are low buttresses. The south elevation contains a large arched opening with timber doors and three windows on either side all with elliptical brick arches and timber louvers. This elevation stands in front of a cobbled yard and an entrance way with stone piers and timber gates. At right-angles to the smelting house on the east side, the ASSAY OFFICE is of two storeys with a hipped slate roof. The west elevation, facing onto the smelting house, has a C21 door with granite quoins to either side, or a window above, both under elliptical arches. The east elevation has a set of stone steps leading up to a first–floor C21 entrance door. There are two C21 eight-over-eight sash windows on this level and two larger C21 ground–floor casement windows, all with elliptic arch brick heads. Attached to the south end of the Assay House is the east elevation of the smelting house, with oval windows above and two arched openings below with granite voussoirs, one of which is blocked. On the west side of the smelting house at right angles is the UNMANUFACTURED TIN STORE AND OFFICE. The asymmetrical front (east) elevation has stone steps and an iron railing leading to first-floor four-panelled door.  To either side of the entrance is a twelve-pane hornless sash window with brick arches above and there are smaller windows on ground floor to either side of the steps, with segmental arches, internal shutters and stanchion bars. The building is hipped and has two brick chimneys on the west side and one to the north.

INTERIOR: the SMELTING HOUSE is a full-height open space with a large intact timber queen-post roof structure supported by two rows of cast-iron beams, some of which have a date stamp of 1849. The room would have originally contained three furnaces where the ores would have been heated to produce the tin. These are no longer extant; however their locations can still be identified through depressions in the floor.  In the east corner is a small room which forms the corner of the assay house. This was originally a strong room for storing the tin ingots, and the windows retain their protective iron bars. These windows and the entrance door are now blocked and the room is part of the converted assay house and used as a bedroom. The ASSAY HOUSE has recently (2009) been converted into living accommodation with an open plan first-floor and central staircase leading down to two bedrooms and bathroom below. Most of the internal decoration is modern; however the doorway and window openings which would have led through to the smelting house survive, albeit blocked.  The building has a timber king-post roof. The UNMANUFACTURED TIN STORE AND OFFICE is over two floors. The store room on the ground-floor is a long open room which is accessed via a timber plank door in the south-west corner of the smelting house. The first-floor office is largely late-C19 in character. The king-post roof is intact and a section of the lath and plaster ceiling to the north end survives. An internal lath and plaster division wall survives at the south end. The north end is now largely open, with some fragments of internal lath and plaster wall remaining, together with a chimney breast.

The Union Tin Smelting Works are located at Weir Quay next to the River Tamar and were in operation as a tin smelter from 1849 to 1896. The tin smelter was originally one of two adjacent smelters, including a silver/lead smelter to the west and together they formed the Tamar Smelting Works. The silver/lead mine was the earlier of the two smelters, built in the 1820s. In 1845 the silver/lead smelter was acquired by the Tamar Silver Lead Mining Co. In 1849 it set up a separate company, The Union Tin Smelting Company, to specialise in smelting tin, and a specialist smelting works was constructed next to the existing silver/lead works. In 1854 the silver/lead works closed and in 1863 the tin smelting works followed suit. Both smelting works are depicted on an engraving in 1865; it shows the tin smelter with its two large chimneys, assay house to the east and store to the west. The tin works were reinstated in 1870 under the Tamar Tin Smelting Company and soon after the smelting house was enlarged to the east. The First Edition Ordnance Survey map (1883) shows the two smelters identified as ‘Tamar smelting works (tin and lead, disused)’; however, various texts refer to the tin smelter in use until 1896. It was later used as an estate workshop, until the end of the First World War, and the tin smelters were used as vats for manufacturing jam. In the early C21 work was carried out to the assay house including the conversion to domestic accommodation, and repairs were made to parts of the boundary wall and some of the ancillary buildings. The range of shelter sheds in the lower yard underwent extensive repairs. An archaeological recording programme was carried out as part of the agreed programme of works for the listed building consent. This involved the recording of the upstanding structures. A service trench was also placed through the centre of smelting house and the adjoining yard to record the archaeology.

When the site was used as a smelting works the ores would have been brought in carts from the quay, to the west of the site, up an adjacent lane and deposited at the entrance gate and yard to the west of the smelting house. The weighing machine for the ore was originally located in this yard; although demolished, its original location can be discerned from a square mark in the surviving cobbles. The ore would then have been taken around the corner through the smelting house where the ore would be heated in reverberatory furnaces to extract the tin. The extracted tin would be stored in the adjoining buildings, unmanufactured metals in the store to the west (above which is an office) and manufactured tin in a strong room on the east side next to the assay house, where the metal was tested for tin content. Above this wing was the site manager's accommodation.

The former Tamar Union Smelting Works is listed at Grade II, for the following principal reasons:

* Historic interest: Tamar Union is an important survival of a reverberatory smelt works site which played an integral role in the processing of tin within the Cornwall and West Devon mining industry;
* Architectural interest: an attractive group of buildings which, despite alterations, retains a good amount of C19 building fabric and decoration;
* Intactness: externally, it is an unusually intact example of a smelt works complex;
* Group value: it has group value with other listed buildings within the Weir Quay Conservation Area, including a nearby lime kiln (Grade II).