A Grade I Listed Building in Great Mitton, Lancashire 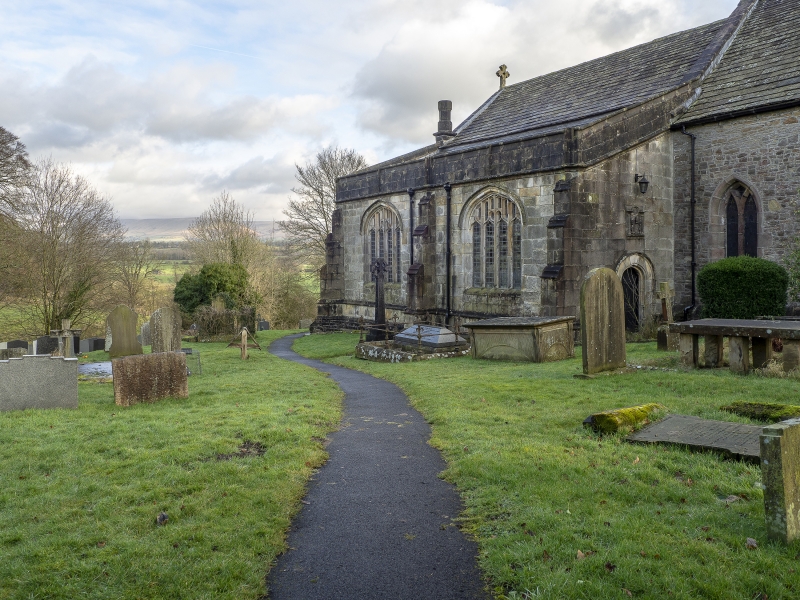 Church, late C13th with early Cl5th west tower and late Cl6th north
chapel. Sandstone rubble with stone slate roof. Comprises a west
tower, nave, narrower chancel, north chapel, and south porch. The
3-stage tower has diagonal buttresses, and an embattled parapet. The
bell openings have pointed heads with hoods, and 2 cinquefoiled lights
with panel tracery. The west window has 4 cinquefoiled lights, panel
tracery, and a hood. The west doorway is wide and moulded with a pointed
head and hood. The nave windows are chamfered in 2 orders and are of 2
lights with Y-tracery and pointed heads. In the north wall there are 2
to the east of the door. To the west is a 2-light window of C18th type,
with a window with plain reveals above lighting the gallery. The door
is chamfered with a pointed head. The south wall has one original
window to the west of the porch and 2 to the east, the right-hand one
being reconstructed. To the west of the porch is a window with plain
reveals lighting the gallery. The porch has a wide chamfered outer
doorway with hood. The inner doorway is moulded, with a pointed head
and with a hood with head stops. The south chancel wall is peddledashed.
To the right of the priest's door are 2 windows matching the early ones
to the nave. To the left is a window with mullion and transom, trefoiled
heads to the upper lights and a trefoil under a pointed head. The
doorway has a pointed head and 3 orders of sun quadrant moulding. The
east window is of 5 lights and intersecting tracery. The north-east,
or Shireburne, chapel is of ashlar, with one bay to the east and 2 to
the north. The windows have Tudor-arched heads, ogee heads to the lights,
and panel tracery. The west wall has a moulded doorway with Tudor-arched
head. Above is a wall tablet with attached columns enclosing a coat of
arms and date '1594'.

Interior. The nave has a west gallery with panelled timber front. The
open roof is possibly early C17th and has 9 trusses with arch-braced
collars and short king posts braced to the ridge. Between the purlins
and principals are carved brackets, possibly a Cl9th addition. The
chancel arch has 2 orders of sunk quadrant moulding. On each side of
the opening are attached shafts with capitals. The chancel screen
incorporates some medieval woodwork, possibly from Sawley Abbey, including
an incomplete Cl5th inscription. Much of the decoration is an imitation
in cast iron or terra cotta. In the chancel are triple sedilia and a
piscina, moulded and with trefoiled heads. The chancel is divided from
the Shireburne chapel by 2 pointed arches of 2 chamfered orders carried
on octagonal piers. Beneath the arches is a wooden screen with turned
balusters, the upper parts of the openings being filled by carved
tracery with an ogee under, possibly Cl5th and re-used. The nave pews
incorporate old woodwork, including initials and a date '1628'. The
pulpit incorporates some C17th carving. In the chapel the main memorials
are as follows. An alabaster chest tomb of Sir Richard Shireburne(d. 1594)
and his wife Maude, with recumbent effigies and with the sides of the chest
decorated by figures and by coats of arms. By Roilly of Burton (Church
Guide). A wall monument to Richard Shireburne (d. 1667). Kneeling figures
face one another across a prayer desk within an architectural frame with
paired columns and an entablature supporting a cartouche. Recumbent
effigies of Richard Shireburne (d. 1667), Richard and Isabel
Shireburne (d. 1689 & 1693), and Richard Shireburne (d. 1690),
all with lengthy inscriptions. Commissioned by Isabel Shireburne
c.1690 and carved by Edward Stanton. A wall monument to
Richard Shireburne (d. aged 9 in 1702) by William Stanton. Figure
of boy against reredos background, with cherubs. Rupert Gunnis,
Dictionary of British Sculptors 1660-1851, 1953.