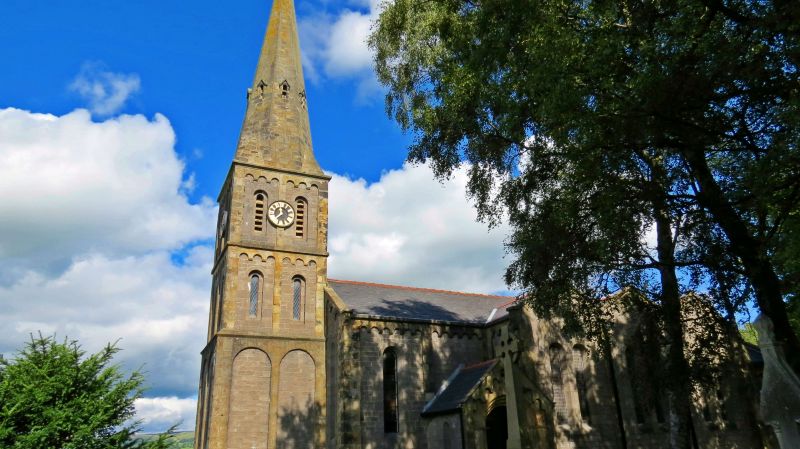 Church, 1838, by Edmund Sharpe, with aisles and chancel added 1882 by
F. Robinson (Pevsner). Squared limestone with sandstone ashlar dressings,
and slate roof. Romanesque style, with additions in keeping. Comprises
a west tower with spire, a nave with south porch, 3 transeptal gables on
north and south sides forming aisles, and a lower chancel with semi-
circular apse. The tower is of 3 stages broached to a spire of sandstone
ashlar. The lower stage has 2 blank arches on each side, with 2 round-
headed windows on the west side. The upper stages each have 2 similar
openings on each side, separated by pilaster strips and with Lombard
friezes. The bays of the main church are separated by pilaster strips
and have Lombard friezes. The nave, of 2 bays on the north side and with
one bay to the west of the porch on the south side, has tall windows
with splayed limestone reveals and round heads. Each aisle bay has
similar windows, paired with a single pierced quatrefoil above and under
a semi-circular relieving arch. A plaque in the wall of the apse records
that the chancel was built in memory of Robert Ingram, d.1879.
Interior. The 3-bay nave arcades have semi-circular arches, banded round
columns, and foliated capitals and responds. The moulded round chancel
arch is carried on short corbelled shafts with foliated capitals. Below
are piers with angle shafts, from which spring flanking arches opening
into the organ chamber and the south chapel. An inscribed band in the
south aisle wall records that the church was enlarged in 1882. At the
west end is a gallery with timber front. The roof is carried on arch-
braced trusses. The windows contain glass of various late C19th dates.