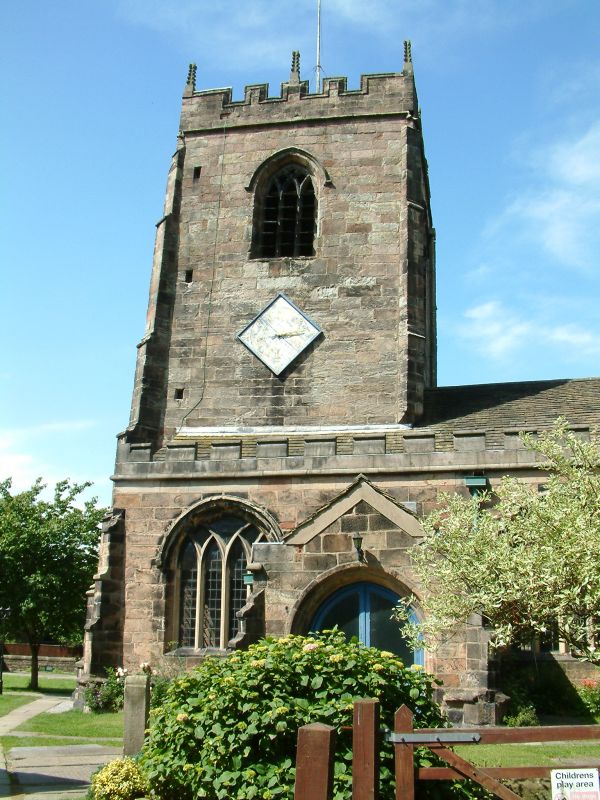 Church of England Parish: Croston St Michael and All Angels

Parish church, probably mainly C16, with some earlier fabric at east end,
and C15 tower: altered in C17, partly rebuilt at various dates in C18,
re-roofed and "beautified" 1823, restored 1866-7. Squared sandstone. West
tower, nave with north and south aisles under same roof, chancel with north
and south aisles. Massive square 4-stage tower, mostly embraced by nave,
with angle buttresses and embattled parapet with corner and intermediate
pinnacles, has deep moulded pointed-arched west door with hoodmould
terminating in carved heads, above this an arched 4-light window with
moulded surround (probably C16 but containing later tracery), 3-light
belfry louvres with intersecting tracery and hoodmoulds; clockfaces on the
north and south sides; and looplights to an internal vice in the south west
corner. Nave with aisles externally divided by buttresses into 5 bays, has
large 4-light windows, almost semi-circular headed, with restored
intersecting tracery, and hoodmoulds; 1st bay on north side has a very wide
moulded 4-centred arched doorway with leaf spandrels and square hoodmould
on the centre of which a small shield displays the Hesketh arms; above this
a low 4-centre-headed window of 4 round-headed lights with hollow
spandrels, flanked at sill level by carved armorial shields; and a
battlement above inscribed: "THIS CHURCH WAS NEW ROOF'D AND BEAUTIFYD AD
1823". On south side 2nd bay has a gabled porch with diagonal buttresses
and straight side parapets, an almost semi-circular-headed arched doorway
moulded in 2 orders, and inner 4-centred arched doorway with moulded
surround. North chancel aisle (Becconsall chapel) has two 3-light windows
in the side and one in the end; south chancel aisle (chantry chapel of St.
John the Baptist) has a priests door with 4-centred head, two 3-light
windows in the side and one at the end. The projecting bay of the chancel
has a 5-light pointed arched east window with intersecting tracery, and on
the south side a smaller square-headed window with 3 cinquefoil-headed
lights and perpendicular tracery above. Interior: lofty 4-bay nave, with
5th bay at west end formed by north and south arches of tower: nave arcade
of relatively low pointed arches chamfered in 2 orders springing from
octagonal columns, the caps and springing evidently altered and
reconstructed; flat-pitched roof of 6 bays with moulded beams on carved
wall brackets (similar to aisles); tower arches on north and south sides
similar to those of nave but of 3 orders, but arch to nave springing from
much greater height. Chancel arch (modern) of 2 orders springing from
shafts with moulded caps; chancel aisle arcades rebuilt. In chancel,
remains of an aumbry in the north wall, and of a double piscina in the
south wall, this with a carved capital of a shaft, possibly C13; at west
end, hexagonal font dated 1663 with carved geometricised quatrefoil panels,
on 6-shafted pedestal; and over south door a hatchment. Reference: VCH
lancs VI pp. 82-85.