A Grade I Listed Building in Slaidburn, Lancashire 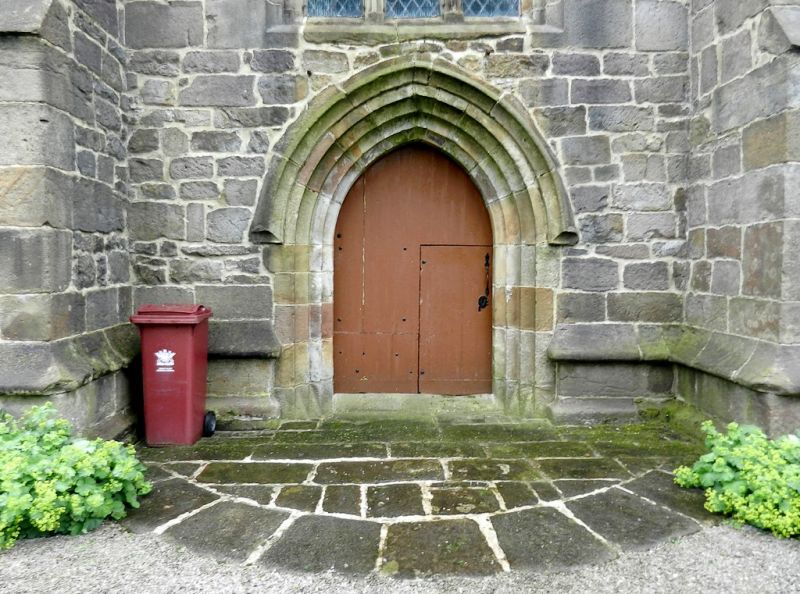 Church, probably early C15 and late C15 with early C17 alterations.
Sandstone rubble with stone slate roof. Comprises a west tower, nave and
chancel under a continuous roof, with clerestorey, north and south aisles
and south porch. The 5-stage tower has angle buttresses and a solid
parapet. The west door has a pointed head, and jambs of two hollow-chamfered
orders. The west window is of three cusped lights with panel tracery. Above,
one over the other, are two niches, now without statues, having projecting
decorated heads. Between them is a one-light chamfered window. The bell
openings, probably early C15, have pointed heads and hoods, each having
two cusped lights. The nave and clerestorey windows, probably late C15,
have flat heads, mullions, and cusped lights. The only exception is the
2nd window from the east in the south wall which is similar to the bell
openings of the tower and has a hood with head stops. To its left is a
blocked priest's door with a hollow-chamfered segmental head. The east
wall was rebuilt in 1866 and has a window of five cusped lights with tracery.
The south porch has a chamfered doorway with 2-centred head and an inner
hollow-chamfered doorway. The north doorway is hollow-chamfered with a
segmental head and a false keystone with a carved head. The north aisle
has buttresses with moulded offsets.

INTERIOR: The arcades are of six bays
to the south and five to the north and have octagonal piers with moulded
capitals, and pointed arches of two chamfered orders. Towards the east end
of the south aisle wall is a piscina with moulded cusped 2-centred head,
The open timber roof is probably early C17. It has short king posts,
braced to the ridge and rising from arch-braced collars. Both nave and
aisles have cusped wind braces, the aisle principals having ovolo mouldings
and some carved decoration near the aisle walls, including heads. The
church is unusual for its quantity of good early woodwork. It has C17
and C18 pews, including box pews. A C18 3-decker pulpit has raised and
fielded panels, a stair of slim turned balusters, and sounding board with
carved entablature. The rood screen, probably of the 1630s but possibly
later, has tapering square uprights with capitals, decorated arched
openwork heads, openwork frieze and dentilled cornice. To the east of the
rood the east aisle bay on each side is divided from the chancel by a
screen with narrow mullions and thin heads of panel tracery. The south
aisle is divided towards the east by a wooden screen with cyma-moulded
mullions.