The Cottage and Grey Eaves 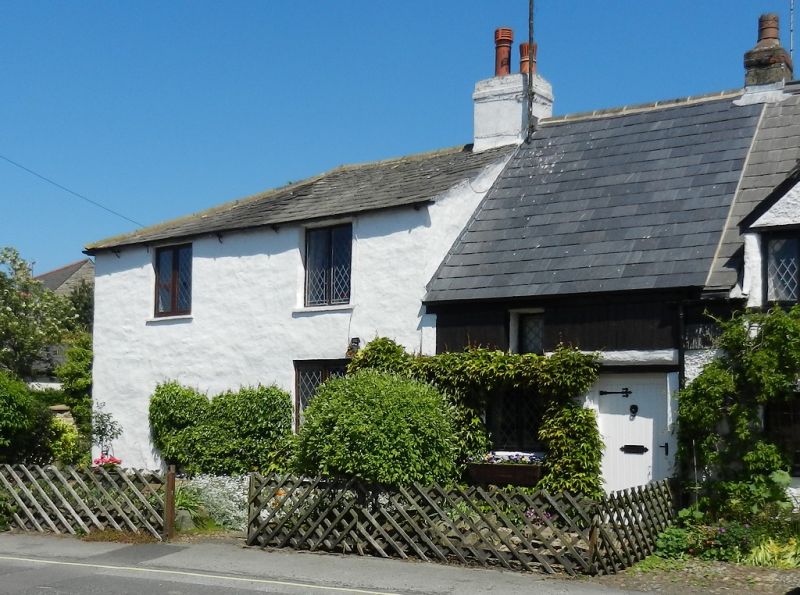 NETHER WYRESDALE STATION LANE
SD 54 NW
5/173 Scorton
17-4-1967
The Cottage and Grey Eaves
GV II
Houses, C17, altered. Cruck-framed with rendered rubble walls and slate
roof replacing thatch, apart from part of Grey Eaves, which is covered
with asbestos sheets. One storey with attic. The Cottage, at the right,
has modern windows with plain reveals: 2 to the left of the door and one
to the right. There are 2 gabled attic dormers. Grey Eaves, at the left,
has an earlier part which appears to be of the same build as the left-hand
part of The Cottage and is of one bay. The windows have plain reveals. The
ground-floor one is modern. Above, under the eaves and lighting the attic,
is a casement with glazing bars. At the left is a 2-bay 2-storey C19
addition with a roof hipped at the left. Its windows are modern with plain
reveals. The left-hand bay has a blocked ground-floor doorway. Chimneys on
right-hand gable, between houses, and to right of C19 addition to Grey
Eaves. Inside, The Cottage has 2 cruck trusses with re-used blades,
collars, tie beams, and blades joined by yokes below the apex. The trusses
are in the walls which divide the ground floor into 3 main rooms. The
front door, opening into the middle room, is unlikely to be in its
original position, as mortise holes in the soffits of the 2 beams suggest
that the room was once divided by a wall running from front to back and by
a second axial wall. The right-hand room has exposed ceiling joists, the
axial main beam being a modern replacement.