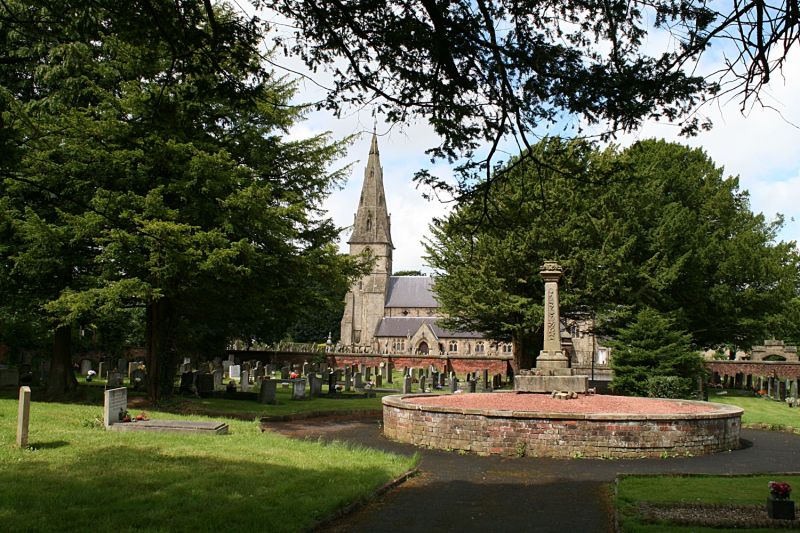 Roman Catholic Church 1845 by Augustus Welby Northmore Pugin. Dressed sandstone with ashlar dressings, slate roofs with coped gables surmounted by crosses. Nave with clerestory and aisles, chancel with aisles but unaisled sanctuary. Single
storey south porch. West tower and spire. Vestry block to north east.
The five clerestory windows are pointed quatrefoils under pointed
hoodmoulds; aisle windows of 2 lights, mostly with ogee heads under a
segmental pointed head, but to west of south porch (which is in the second
bay) baptistry window has 3 lights with trefoiled subarches under a pointed
trefoil; similar windows under hoodmoulds at east end of chancel aisles.
East window in sanctuary has a hoodmould and three lights with pointed
trefoil heads surmounted by a pyramid of three pointed trefoils. Fairly
plain tower with angle buttresses and a splayed stair turret at SE corner;
a 2-light window above the richly moulded west door, then a small ringers'
chamber window below a deep offset; above this on each face is a 2-light
belfry-window with reticulated tracery set beneath a continuous hoodmould
which runs around the tower. The broach spire has 3 tiers of lucarnes on
alternate faces and a sort of coronet of blind lucarnes near the top; it
rises to 110 feet. Interior: 5-bay nave with double-chamfered two-centred
arches on round piers with tall plinths. (The floor was lowered c.1900).
Clerestory and aisle windows have rear arches with segmental pointed heads.
Open roof of slender scant:ling: tall wall posts braced to tie beams which
carry crown posts braced to collars and collar purlins. Aisles have
lean-to roofs. Segmental pointed chancel arch with continuous chamfer.
Chancel, which has a wagon roof, is open to side chapels through double
chamfered arches. It has a triple sedilia with cusped arches under a
square hoodmould. Of the fittings only the Crucifixion, which hangs above
the chancel arch, and the former rood screen (now at the west end) were
designed by Pugin. The screen (made of Caen stone but painted brown) has a
wider central cusped and crocketed ogee arch flanked originally by two
(since c.1900, by three) similar but narrower arches on each side with a
plain dado and a coved bressumer enriched with little angels and fleurons.