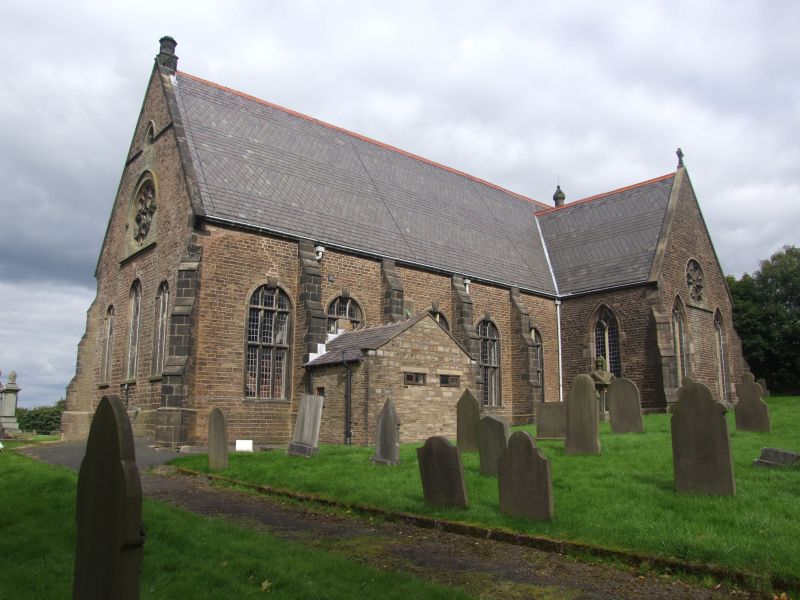 Church. Said to have been rebuilt 1740, enlarged in 1828, partly rebuilt
again 1865 (date of transepts and chancel); nave probably early C19,
retaining some C18 fabric, re-roofed 1865. Watershot coursed sandstone,
slate roof with patterned bands. Nave with north and south transepts,
chancel. Large and lofty nave in simple Georgian style, with added
buttresses and porch, wide full-height transepts in simple Gothic style,
low chancel matching these. Nave divided into 5 bays by full-height
3-stage buttresses which do not match the spacing of the windows; in each
bay (but mostly off-centre) a very large round-headed window in plain
surround with prominent keystone, and 2 chamfered mullions and transoms
making 9 lights diminishing in the height; 2nd bay on north side has a
gabled porch with arched doorway moulded in 3 orders, the window here
reduced to a lunette above the porch; 3rd bay on south side has a square
sundial mounted to the left of the head of the window (and shaded by the
buttress to its left) inscribed "Roger Hargreaves & Rich.Whittle .
CHAPEL WARDENS
Dom 1826"
West gable has diagonal buttresses, 3 round-headed 2-light windows with
Y-tracery, imposts and keystones, the outer windows smaller than the
central one, a straight dripstone in the centre at eaves level, over this a
circular window containing 5 trefoils, with an archivolt, and a trefoil in
the gable above, with a band arched over it. Transepts have large
pointed-arched 2-light windows with traceried heads: one in the sides, and
2 in the gables linked at the heads by a band, above which is a wheel
window; north transept has a central door like that in the porch. Chancel
has one 2-light window in each side, with tracery matching those in the
transepts, and a traceried 3-light east window. Interior: arch-braced
hammerbeam roof with curved struts; very lofty arch between nave and
crossing of transepts supported by slender chamfered piers with moulded
caps, exceptionally small side arches springing from these and dying into
the corners of the nave, with moulded respond-caps; lower chancel arch
in matching style: whole interior suggests radical remodelling of
formerly-galleried church. Reference: VCH Lancs VI p.51; Pevsner;
Hewitson Our Country Churches and Chapels (1872) p.570-4