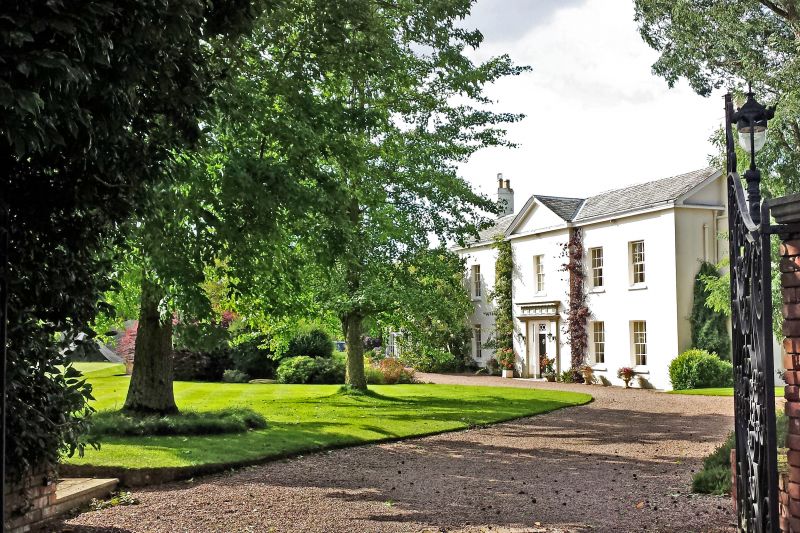 Substantial detached house. Early C19, possibly incorporating an earlier
structure. Blocked stucco; gabled-end slate roof. L-shaped plan with rear
extensions making it a double-depth house; the intersection of the 2 main ranges
was occupied (in 1839) by a polygonal building which has since been replaced by a
conservatory; the main stairs are situated to the rear of the entrance hall. 2
storeys.
Front: symmetrical 2:1:2 bay range, the central bay slightly projecting with a
pediment; moulded cornice throughout. All windows are 12-pane hornless sashes,
those to the ground floor with shaped blind boxes; central tripartite doorway with
panelled door under rectangular traceried fanlight, and flanking 4-pane sashes;
cornice with dentil frieze with triglyphs, and pilasters. Pilaster quoins. 2
external end stacks; that to the right could indicate the existence of an older
core to the house. Both end gable walls treated as pediments. Extending to the
right, and set well back is a later C19 double depth wing, each component
separately gabled, and forming a 2-window range with 12-pane hornless sashes to
both floors; internal end stack. The left-hand rear wing, gable, with pediment set
well back behind hipped-roofed conservatory; left-hand side elevation with 2
hornless sash windows to 1st floor, 6 panes up, 12 down and a balcony with cast
iron balusters. 12-pane hornless sash window to ground floor.
Rear: the gable wall of the wing just described and the adjoining extension both
with pediments with paired console brackets; contemporary windows with 12- or 16-
pane hornless sashes; axial stacks, plastered.
Interior: contemporary fittings include panelled shutters, plaster cornices, that
to the entrance hall with acanthus motif; doorways with panelled reveals and doors;
some doors under segmental pediments; marble or polished limestone chimneypieces.