A Grade I Listed Building in Eccleston, Lancashire 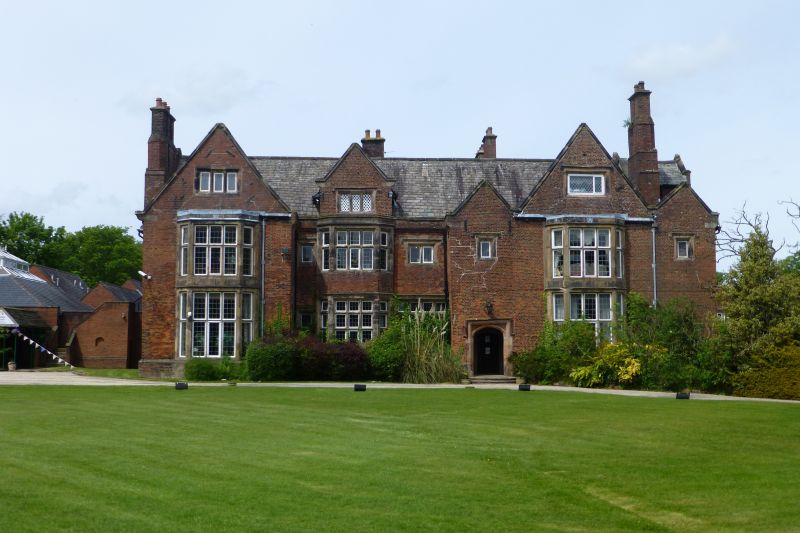 Manor house. Dated 1670 on rainwater head, but probably earlier; altered
and enlarged in C19. Thin handmade brick with blue diaper patterns,
sandstone dressings, blue slate roof. L-shaped plan formed by south-facing
hallrange with projecting gabled wings, and north east wing to rear; Cl9
additions in rear angle. Two storeys with attics; stepped facade
presenting 5 unequal gables: tripartite right wing composed of 2½-storey
gabled centre with smaller gabled 2-storey porch to left and stairturret
closet wing to right; 2½-storey gabled left wing; and a gabled attic behind
the parapet over the hall. The porch, up 2 semi-circular steps, has a
Tudor-arched outer doorway with chamfered jambs and hoodmould, studded oak
inner door, and at 1st floor a small chamfered window with a hoodmould; the
stairturret part has one similar window on each floor; the principal gable
of this wing, and the gable of the left wing, have C19 2-storey canted bay
windows, and C17 3-light attic windows, that in the right wing with a
hoodmould but now lacking mullions. The hall range, set back between the
wings, has a 2-storey canted bay with 3-stage transomed and mullioned
window at ground floor and similar 2-stage window above, (finished with a
stone parapet), to the right of this bay a mullioned and transomed 6-light
window and a 2-light window above, to the left one small chamfered window
on each floor, and in the attic gable a 3-light window with a hoodmould.
All the gables have stone copings; a large 2-flue chimney stack rises from
the junction of the right wing and its stairturret; and a rainwater head at
this junction is lettered T M. West gable end is dominated by an
1670
elaborate external chimney stack with large offsets on its left side and
moulded corbelled flues at lst floor and attic levels, terminating in 3
octagonal chimneys; at ground floor this stack has 2 small arched recesses
(beeboles?), and a blind doorway with 4-centred head, framed by the lowest
offset; to the left of the chimney is a large 9-light mullion and transom
window at ground floor, a 2-light window on each floor above (all with
hoodmoulds) the right jambs of the lowest and the highest partly overlapped
by the chimney stack. Breaks in the coursing at attic level suggest that
the rear slope of the roof has been raised and attic window inserted. (C19
additions to the rear of less interest). Principal feature of east end is
3-storey stairturret (and its 2-storey wing to the front), which has a
chamfered rear corner and gable corbelled over this, 6 triple-chamfered
stairlights and 2 similar windows to the closets, all with hoodmoulds.
North-east wing (perhaps later C17), 3 bays and 2½ storeys with 3 gables,
has recessed transomed windows with straight drip moulds, mostly 9 lights
but at ground floor of the 1st bay 3 vertical-rectangular cross-windows,
and those in the gables 8 lights. Very thick west wall of this wing has an
extruded octagonal stairturret with arched doorway at ground floor and
corbelled gable, and 3 stacks of chimneys, but is mostly covered by
additions and by creeper. Interior: principal feature of interest is
drawing room in west wing which is panelled in its full height all round
with Renaissance oak wainscot: fluted Ionic pilasters with architrave,
inlaid frieze and shallow cornice, the bays having geometrical square
panels framed by fluted pilasters with elaborate inlaid panels above and
below and open fretwork cresting. Elsewhere: in the attic, remains of a
long gallery (made after 1st building) with small fireplace at west end;
and in rear wing at ground floor a tripartite kitchen fireplace, and on the
floors above, lodgings with timber-framed partition walls, stone fireplaces
(mostly blocked) and garderobe closets built into the chimney stacks,
access to these lodgings by a spiral newel oak staircase in the turret.
Most internal doorways and fireplaces have 4-centred heads; some altered or
inserted. Otherwise altered. Reference VCH Lancs VI pp 166-169.