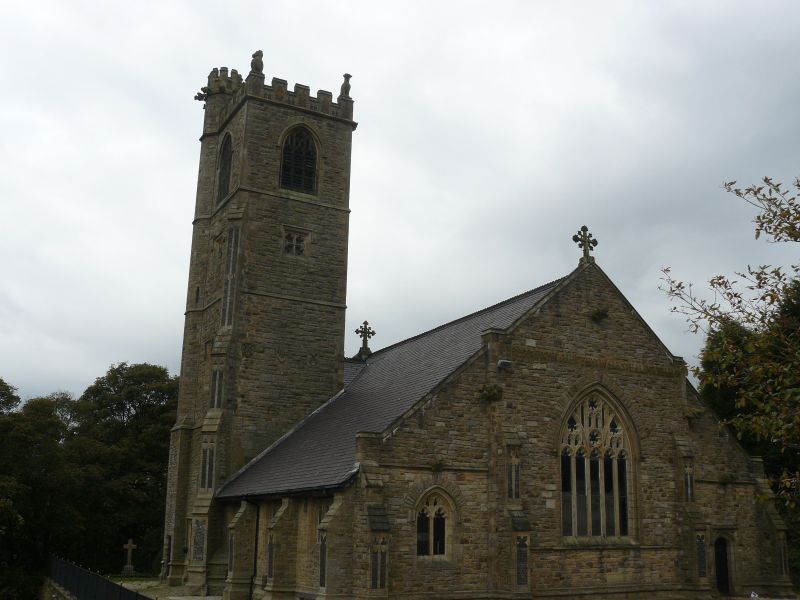 II
Church. 1847-50. By J. Clarke. Seriously damaged by fire and rebuilt in much reduced form by the Buttress Fuller Geoffrey Alsop Partnership in 1988. The only parts of the building to remain substantially intact were the embattled west front and west tower, the aisle walls and the arcades. The walls are of sandstone rubble and the roof slate. The 4-stage tower has a polygonal stair turret finishing above the eaves with grotesques and battlements, diagonal buttresses with flint and brick panels, bands at all levels; arched doorway on south side in square headed surround with hoodmould, at 2nd and 3rd stages rectangular lancets with tracery and hoodmoulds, and transomed 3-light belfry louvres with tracery in the heads. West end has doorway with 2 orders, spandrels with carvings of lamb and bird, square-topped surround and hoodmould; 6-light west window with Perpendicular tracery; west end of north aisle has transomed 3-light window. The nave and aisles have been rebuilt to a square 4-bay plan with the tower occupying the south west corner.
INTERIOR. Some of the grotesques and other carvings (said to be by a Mr Egglesmere who was deaf and dumb) were salvaged from the fire and now act as corbels inside the church. The reredos, designed by Walter Tapper in 1922, was acquired from Christ Church, Cotmanhay, in Derbyshire, after the fire.
The church's tower and west front still form an immensely impressive group at the top of the steep path leading to the west door.