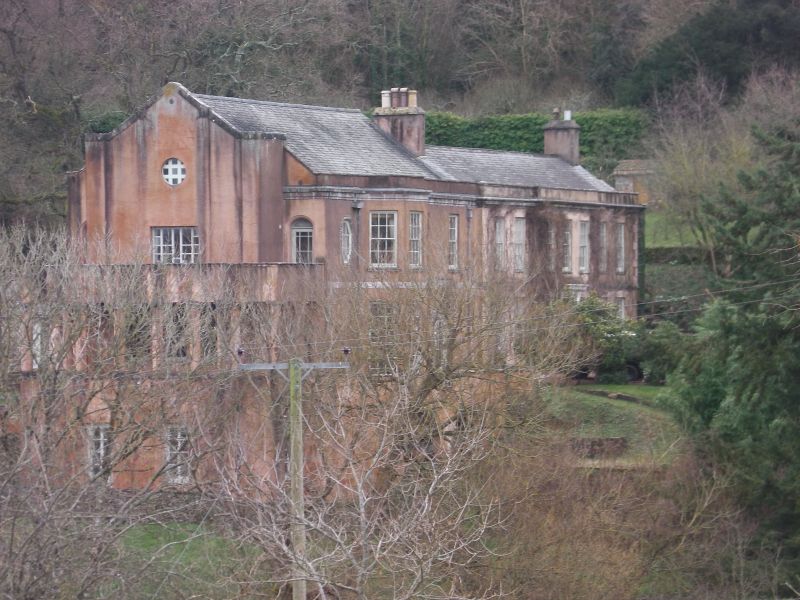 SX 86 NW IPPLEPEN
2/115 Great Ambrook
23.8.55
- II
2 houses, formerly large house. Main block is C18, built over probably medieval
undercroft, with C17 rear wing and Edwardian additions, altered in later C20.
Stucco walls with rusticated quoins, rear right hand wing is rendered rubble. Gable
ended slate roof, low pitched to front block behind low parapet. Front block has 2
stucces brick axial stack, originally at gable ends. 2 rendered stacks at rear
which are axial with left hand wing. 2 stacks to right hand rear wing, one at gable
end has rendered brick shaft and the other is a rendered rubble lateral stack.
Complex plan: the main C18 block is single depth with 2 heated rooms, one on either
side of central entrance hall which leads to stairwell at the rear, the left hand
room is deeper than the right hand room. This block is built over what appears to
be the medieval undercroft to an earlier house. At the rear of the hall is a C17
wing heated originally by lateral stack which was apparently relegated to service
use when the front block was built on. It has a newel stair in a projection beside
the stack. Main block remodelled internally and refenestrated in c.early C19. In
the early C20 a large music room was built on at the left end of the house and was
of 2 storey height with gallery and no 1st floor. At the right hand end on the 1st
floor a small dressing room was added, supported on pillars on the ground floor. At
the rear of the ground floor, right hand room a 1-room plan wing was added probably
at the same time. Later C19 single storey extensions at rear. Probably in the mid
C20 the music room was ceiled to create rooms above making use of the spiral stairs
in the projection at the rear which formerly led to the gallery. In the later C20
the house was divided into 2 units at the lower end of the entrance hall.
2 storeys with attic above main C18 block to right. This part originally had a
symmetrical 3 bay facade with slightly projecting central bay. The outer bays have a
2 window front the central one has a 3 window front. All are probably early C19 12
pane hornless sashes. The middle bay has a central doorway with flanking pilasters
which each have a carved plaster human face at the top. Moulded frieze and carnice
which breaks forward over pilasters at either side. Probably original heavy moulded
6 panel door has rectangular fanlight with heavy iron radial glazing bars.
Stringcourse above ground floor windows and moulded cornice above 1st floor windows
just below parapet.
To right of right hand bay is small 1-window bay which is supported on the ground
floorr on pillars. Beyond the left hand bay is a 2 -storey early C20 4-window
addition. The left hand window on the 1st floor is octagonal and to its right is a
2-storey canted bay with sash windows. The windows to the right are also facsimiles
of those of the main block. Doorway to right of centre has projecting arched
architrave and French windows with marginal glazing. At the left hand end is a
terrace with Doric Columns standing on a low wall and supporting a parapet above.
At rear of this section is a tall semicircular stair projection. Beyond it is the
C17 wing with rectangular stair projection on the right hand side. To the left is
early C20 wing.
Interior: Cross vaulted undercroft with mainly rubble piers but 2 monolithic
medieval granite piers survive with capitals which have chamfered soffits. Few
visible C18 features in main block apart from same 2-fielded panel doors. Open well
early C19 staircase with column newels, stick balusters and curtail step. Former
music room is panelled up to dado height and has pillars supporting the former
gallery. On the 1st floor are pilasters to gallery new landing. Apparently has
plaster barrel ceiling in roof-space. This is obviously an ancient and important
site and the present building has has a complex evaluation which its facade to a
certain extent conceals.