A Grade I Listed Building in Melling-with-Wrayton, Lancashire 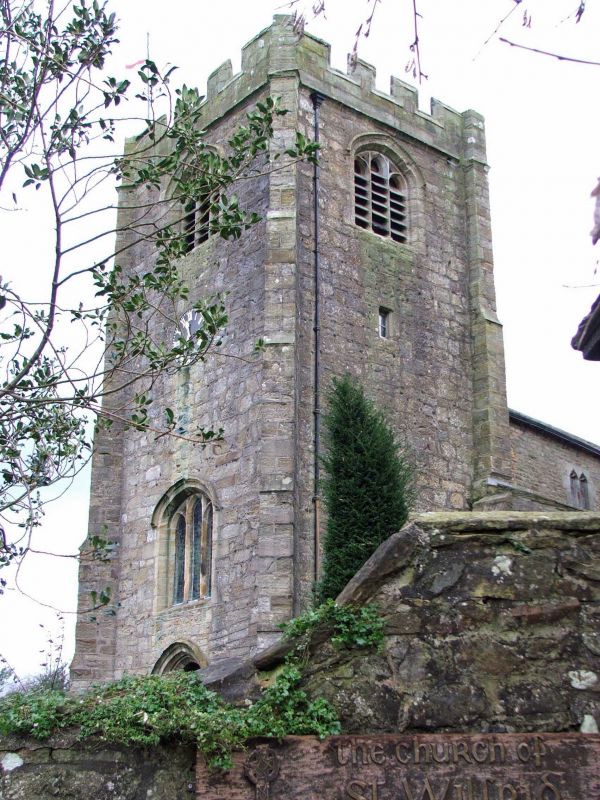 Church, late Cl5th with remains of c.1300 and earlier, restored 1763,
1856, and later Cl9th. Sandstone rubble with stone slate roof. Comprises a
west tower,nave with clearstorey, Chancel under a continuous roof, north
and south aisles, south porch, and south chapel. The tower has diagonal
buttresses and an embattled parapet. The bell openings are of 3 pointed
lights under a Tudor-arched head with hood. The west window is similar.
The west doorway has a pointed head with hood and is hollow-chamfered in 2
orders. The west window of the north aisle is a lancet with outer chamfer
and inner rebate. The corresponding window to the south aisle is of c.1300
and is a trefoiled lancet with hood. The clearstorey windows are of 1856
and are of 2 trefoiled ogee lights. On the north side there are 3 to the
nave and 2 to the chancel. The windows of the north aisle are separated by
buttresses. The eastern one is of 3 trefoiled ogee lights under a flat
traceried head. The others are of 2 trefoiled lights under a flat head
with hood. To the right is chamfered doorway with round head. To the
left is a chamfered C19th vestry door. The south aisle has 2 windows of 2
trefoiled lights with flat heads and hoods. The south chapel is flanked by
buttresses with crenellated cappings, and has a solid parapet with coping.
Its south window is of 3 trefoiled lights with flat head and hood. To its
left is a chamfered doorway with pointed head. Its east window is C19th
and has 3 trefoiled ogee lights under a flat head with Perpendicular
tracery. The south wall of the chancel has a similar window of 2 lights.
The east window is of 3 cusped lights under a pointed head with
Perpendicular tracery. The porch has a gable with coping and pointed inner
and outer doorways, the outer one hollow-chamfered. Inside, the arcades
are of 3 bays to the nave and one to the chancel, with pointed arches
chamfered in 2 orders, octagonal piers, and caps, mostly with their
mouldings defaced. The tower arch is pointed and chamfered in 2 orders
dying into the responds. The roof, of 1763, has king posts rising from tie
beams and braced to the principals. There is no chancel arch, but the
floor level at the east end is higher, approached by a series of steps.
The south chapel has an aumbry without a door, and a squint in the north
wall. The nave pews, screens, pulpit, and communion rails all appear to be
late C19th and by Paley and Austin. The aisle pews are C18th, with raised
panels and ball finials. The numerous wall tablets include one by Webster
for Thomas Smith (d. 1831). Fragments discovered during restoration and
built into the vestry wall include a piece of Norman chevron ornament,
part of a crucifix, and part of a grave slab. -