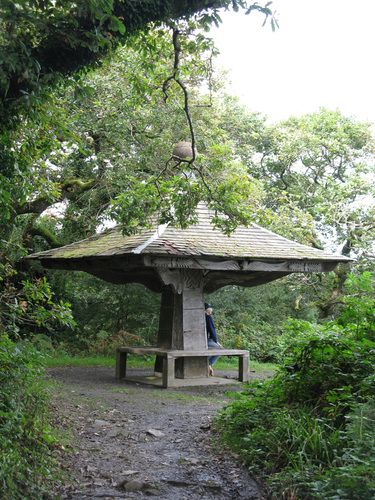 Seat with canopy. Wooden date plaque to south: "1826" restored "1934 by Boon Bros. Boatbuilders of Northam". Wooden structure with a pyramidal shingled roof which is bellcast, lead flashing at the angles and apex, capped by a large stone ball finial. Square on plan. Central tapering square pillar with floral carving on each face, at the base of the pillar a slatted wooden bench; the pillar supports the roof principally on four large curving struts carved like the wings of angels, further uncarved cusped struts set above; soffit with carved angel busts in relief.

Situated on the edge of the cliffs with wide views out to sea. An unusual romantic structure, part of the landscaped park created by Sir James Hamlyn in the late C18/early C19 around Clovelly Court.

This entry was subject to a Minor Amendment on 2 February 2017.