A Grade I Listed Building in Swaffham Bulbeck, Cambridgeshire 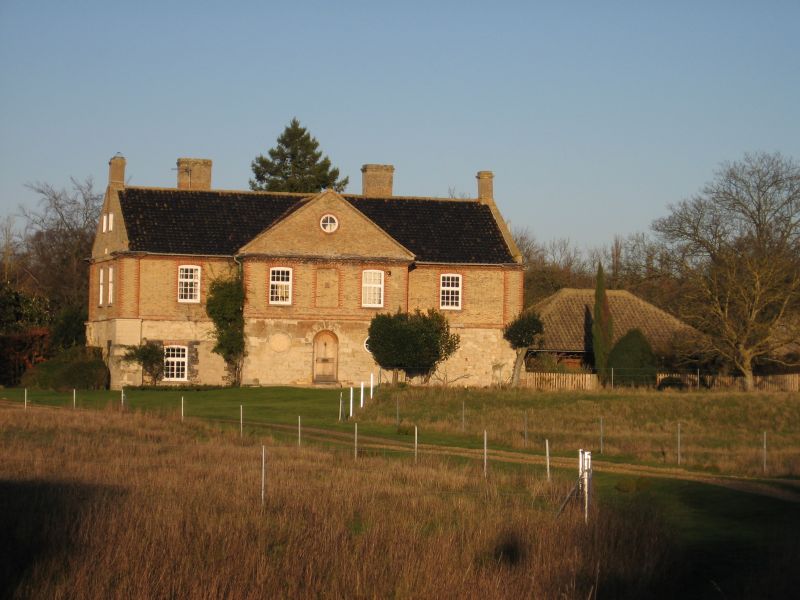 C18 house built over the C13 undercroft of a Benedictine nunnery.

C18 house built over the C13 undercroft of a Benedictine Priory.

MATERIALS: the C13 undercroft has walls of coursed clunch, rebuilt or greatly renewed in the C18, with substantial areas of finely jointed and coursed medieval knapped flint. The door and window openings are generally of Barnack limestone, restored in places with Clipsham limestone. The clasping buttresses are C18 but incorporate stone from the medieval building. The upper two floors are of C18 yellow brick with red brick dressings, and a roof covering of plain clay tiles of C21 date.

PLAN: the Abbey has a rectangular plan with a projecting entrance bay on the south side. The original lodging probably consisted of a first floor hall above the undercroft, which is in five bays and two aisles.

EXTERIOR: the Abbey is a two-storey building plus an attic under a pitched roof. The walls of the undercroft up to first-floor level are of clunch, much of which is C18, and the clunch corner buttresses were added in the C18. Replacement of weathered clunch to the western buttress took place in the late C20. The original door and window openings to the undercroft are more clearly visible from the interior as they have been altered over the centuries.

The north wall of the undercroft is largely refaced in clunch on the original plane. The bases of two buttresses were revealed during excavation work in the early C21, and two bases were subsequently added either side of the central arched doorway. This has a pointed segmental head with a hacked-back clunch label and continuous limestone jambs of two chamfered orders. The two bays to the left have two-light mullion windows of Clipsham stone, added in the early C21 to replace a blocked up doorway and smaller window. In each of the two bays to the right is a fragmentary chamfered sill of a two-light window, now blocked externally. The far right end bay has a new stone window surround (replacing the former wooden-framed window).

The east wall has, from the left, a small, multi-pane window in a wooden frame (post-medieval), and a doorway in an enlarged opening, followed by a small, bricked up window opening.

On the south wall the undercroft has been partially obscured by the addition of the central pedimented projection in the C18. This has a round-headed doorway (built out from, and thereby preserving, the original doorway) with rusticated quoins of clunch, and flanking circular windows. The two bays to the left retain the original splayed jambs (not visible externally), the first with an C18 window opening, with a new sliding sash, and the second blocked up. There are medieval flint repairs to this area of the wall. To the right of the projecting bay a new window opening has been made in the early C21 with a sliding sash.

The west wall also has areas of knapped flint repairs carried out in the medieval period. To the left is a deeply recessed medieval doorway with an inner chamfered pointed segmental head and an outer segmental arch. To the right is a small blocked opening, possibly a locker.

A red brick platband divides the undercroft from the upper floors which are in yellow brick with red brick dressings. The corner buttresses continue from the ground floor in brick with red brick quoins, giving the impression of pilaster strips. The roof has kneelered parapets with stone coping and rendered square chimney stacks at both gable ends. On the north wall are two tall chimney stacks emerging at eaves level. The house has a deep cornice ornamented with a double sawtooth which runs across the long north and south elevations and around the buttresses. On the principal south elevation there is a projecting, pedimented centrepiece lit by three recessed sliding sash windows, the central one blind, with cambered brick arches. The pediment is pierced by a round window. None of the fenestration is original. The wider flanking bays each have one similar sash window. The north elevation is lit by five sash windows, the central three slightly larger, with three dormer windows under hipped roofs lighting the attic, positioned wholly in the roof space. The gable ends have two sashes and two smaller sliding sashes above in the attic, except for the right hand aperture on the east gable end which contains a door leading out onto an external fire escape.

INTERIOR: the undercroft has quadripartite ribbed vaulting, chamfered, with the ribs springing from three octagonal columns with moulded capitals. The responds have similar half-octagonal columns with moulded caps. The bases are hidden with the exception of the chamfered respond base in the south-west corner. The columns of the arcade, the responds, and the doorway jambs are all of Barnack limestone but the capitals, which are contemporary, are clunch. In plan the undercroft is divided by a partition wall between the second and third bays with later openings.

In the central bay of the north wall is the original doorway with a chamfered segmental arch. The two bays to the left each had lockers: the second has twin recesses with round heads and rebates for doors, and the first was probably similar but a post-medieval window was later inserted with brick splays. To the right are two splayed, two-centred arch window openings with two-light mullions inserted in the early C21.

In the south wall, from the left, the second bay has a locker with a two-centred head, slots for a shelf and rebate for a door. The central bay contains a door, and the two bays to the right have splayed, two-pointed arch window openings. The west wall contains a substantial fireplace of red brick with a cambered arch, added in the C18. The bay to the right has a blocked doorway.

In the upper floors of the C18 house, the floor plan has survived more or less intact with a long corridor on the north side and rooms arranged along the south front. On the first floor the middle two rooms have been created from one originally much larger room. The rooms have simple C18 door architraves and one symmetrical-turned baluster from the original staircase survives, along with a short section of moulded handrail, the rest having had to be replaced. None of the fireplaces are original.

The Abbey at Swaffham Bulbeck originated as a Benedictine nunnery, probably founded in the second half of the C12, either by Isabel de Bolebec who became the wife of the 3rd Earl of Oxford around 1209, or by her parents. The first contemporary mention of a Prioress of Swaffham is a reference to land held by her in Silverley in 1199. At its foundation the priory was endowed with the church of Swaffham Bulbeck and 4 virgates (a virgate is around 30 acres) of surrounding land; later more land was acquired in the parish.

The medieval undercroft is the only structure relating to the priory which remains. It was probably a warehouse or storeroom for the Prioress's lodging or a guest house occupying the first floor hall above, placed as a wing to the main conventual group. Little is known about the layout of the priory at this stage and all the associated claustral buildings were lost in the proceeding centuries. It is known, however, that the priory had a gatehouse as it was destroyed in 1368 when a servant fell asleep leaving a candle burning which fell on his bed and burnt him and the gatehouse. A general process of decay in the buildings and finances towards the end of the C14 is suggested by Bishop Fordham's action in 1395 in granting 40 days' indulgence to any who contributed to the repair of the church, cloisters, and other buildings of the priory, as well as to the maintenance of the nuns. During the C14 and C15 it was usually exempt from taxation because of its poverty. The priory always remained small and was never rich, although it did have distinguished patrons. After the dissolution of 1536 the site became occupied by a farm, and nearly all identifiable remains of the church and surrounding claustral buildings were destroyed by clunch quarrying.

In the C18 the priory was acquired by William Hamond of Haling Park, Surrey, who rebuilt the first floor in 1778, adding an attic. The medieval walls of the undercroft were considerably refaced in clunch, and the clasping buttresses at all four corners and the full-height porch containing the stairwell were built at this time. The large brick fireplace and oven at the west end of the undercroft was inserted, although the oven has since been removed. The Enclosure map of 1800 shows there was an extension on the north-east corner of the building. This had been demolished by 1887, the date of the first edition Ordnance Survey map, which explains the blocked doorway visible on the external wall in this location.

William Hammond later built a new farm nearby, and by 1835, it was recorded in The Topographical Dictionary of England that the Abbey was occupied by paupers. The Census records in the mid- to late C19 show that the Abbey continued to be let as tenements; in 1871, for instance, the house was occupied by three families, totalling 26 people. In 1910 the land and property was bought by the Allix family, who owned the neighbouring Swaffham Prior House. The Royal Commission for the Historic Monuments of England (RCHME) described the Abbey and carried out an earthwork survey in 1972. The notes mention that the large central room on the first floor had been converted into two rooms but the partition wall was removed during alterations carried out in the 1990s. This wall has since been reinstated by new owners who have restored the Abbey in the early C21.

The Abbey, an C18 house built over the C13 undercroft of a Benedictine nunnery, is listed at Grade I for the following principal reasons:

* the undercroft, as the only remaining above-ground structure, is a highly significant survival of a medieval nunnery building, providing evidence of the layout and architectural style of one of the most high status claustral buildings;
* the quadripartite ribbed vaulting springing from octagonal columns has survived with little intervention, representing a significant proportion of the original fabric and demonstrating medieval masonry and construction techniques;
* its interest is enhanced by the post-dissolution history and evolution into an C18 gentleman farmer’s house in a well-proportioned and restrained classical style, typical of the Georgian period.

* as the precise locations are known for only about 100 nunneries out of the approximately 153 that were founded, this is a rare and well-preserved example of a nunnery building belonging to the second wave of nunneries founded in the C12 and C13.

* it has strong group value with the Grade II listed wall and the scheduled remains of the nunnery which together make an important historical, archaeological and architectural contribution to our understanding of the Benedictine order, especially as few nunneries (compared to monastic sites) have been examined in any detail.