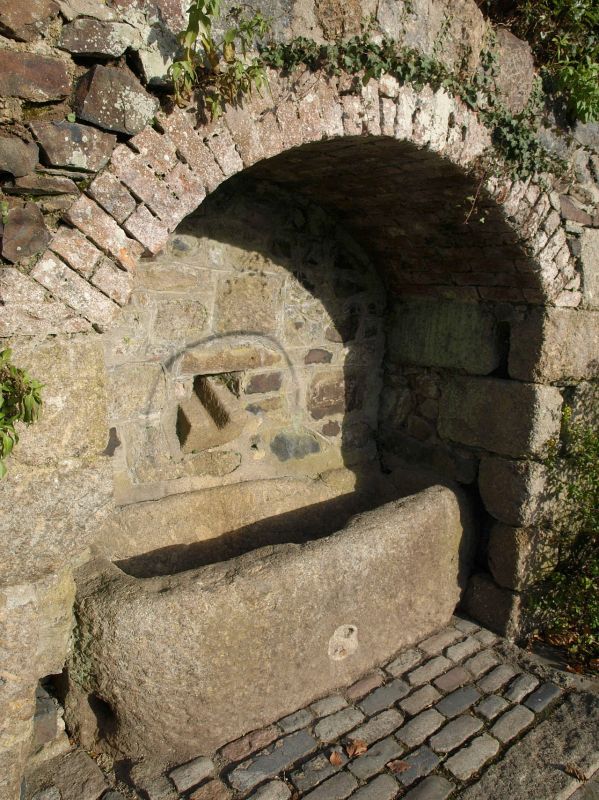 II
St Mary's holy well is built into the south facing garden wall of Church Style Cottage. The basin survives as a large water trough, roughly hewn out of a single piece of granite. A small cement patch in front probably replaces a former outlet pipe and another at a lower level leads out of the south western corner. A gulley cut into the upper part of the north western corner of the trough may represent an overflow or alternatively an inlet channel. The trough occupies a recess with jambs formed of large squared granite blocks topped by a round red brick arch. The lower part of left-hand jamb is moved outwards a little, perhaps to insert an alternative outlet pipe. In the rear wall of the recess is a small granite spout, presumably designed to bring water into the trough. In front of trough is a pavement of granite sets with a kerb of large pieces of granite.

HISTORY: Apart from a legend no definite historical information is known regarding this holy well. In common with many wells, the early history of St Mary's Well, Bovey Tracey is based on speculation. It's position within the Anglo-Saxon settlement known as Boffa suggests that it would have been utilised from this date, but the form of the original structure and whether the well had pre-Christian significance or was first established for domestic purposes only is not known. The nearby church is now dedicated to St Peter, St Paul and St Thomas but was previously dedicated to St Mary. The legend surrounding the well states that the priest of the parish church (St. Mary's as it was then) returned home to find a visitor. The pious priest and his wife shared their meagre supper with the visitor (St Mary), ensuring she was cared for and sheltered. In return for his kindness, she bestowed good fortune on the priest and his family for generations to come and by way to remind them she turned the frogs in the spring golden coloured.

REASONS FOR DESIGNATION DECISION
St Mary's Well, Bovey Tracey is designated at Grade II, for the following principal reasons:
* A sound historical pedigree reflecting its use as a well.
* The survival of original medieval fabric.
* The survival of the substantial trough.
* The direct association with the nearby Grade I listed church and other listed buildings.
* It provides a strong visual contribution to the streetscape.