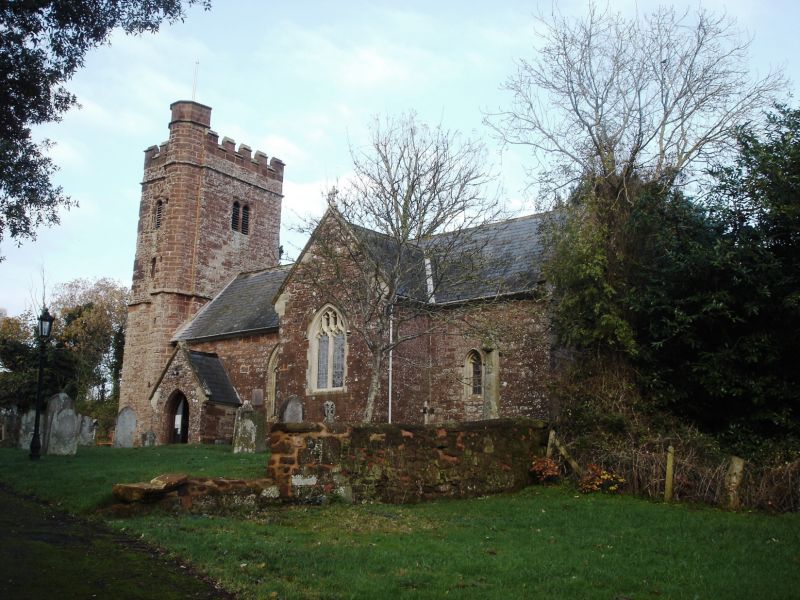 Parish church. C15, thoroughly restored and possibly partly rebuilt in 1856.
Heavitree brecchia, the tower ashlar, the remainder snecked, with freestone dressings
and a slate roof.
Perpendicular style with some C19 Decorated windows. West tower, nave, chancel,
north and south transepts, south west porch. Dr. Oliver considered that the church
was originally a domestic chapel, enlarged in the late C15. The tower bears the arms
of Sir William Huddesfield (d. 1499), Attorney General. C19 references refer to a
very thorough rebuilding: an 1843 description mentions a "projecting aisle on the
north about 9 feet square" (Davison) and it seems possible that the south transept
was added and most of the nave and chancel were rebuilt in 1856. The north transept
has no plinth and a stone rubble base and is probably medieval in origin.
The chancel has a 3-light Decorated C19 east window with a hoodmould, a 1-light C19
cinquefoil-headed window with hoodmould in the south side and no windows on the north
side. The nave has 2 C19 Decorated windows on the north side and 1 on the south
side. The north transept has a 2-light probably medieval Decorated window and a
picturesque C19 chimney stack with asymmetrical set-offs, an octagonal shaft and
coped cap. The south transept has a 2-light Decorated window. The 2 stage
battlemented west tower (no pinnacles) has a polygonal south east stair turret rising
above the tower proper, with a parapet. The parapet and tower battlementing are
largely replacements. Shallow-moulded bellringers' opening on south side, 2-light
chamfered belfry openings on the east, west and south sides, clock on the north side.
The west face of the tower has a shallow-moulded doorway and C19 door with studs and
strap hinges and a 3-light Perpendicular west window with a hoodmould. The window is
flanked by armorial bearings; the arms of Courtenay and Huddesfield on carved shields
below hoodmoulds. Above the west window the string course rises as an additional
hoodmould above a similar shield showing Huddesfield impaled by Courtenay with boar
and dolphin supporters on either side. The fragments of inscribed carved scrolls
survive above the coats of arms. The gabled porch has a probably C19 arched
chamfered outer doorway with bar stops. The interior has a C19 roof, stone benches
with wooden seats and a medieval volcanic trap inner doorway with shallow moulding.
A fine C15 or C16 plank and stud door retains an iron ring with a back plate.
Interior: No chancel arch. Plastered walls. Chamfered arches into transepts and
tower. Unceiled wagon roof with moulded principal members and large foliage bosses;
the bosses are re-used but much of the rest has been replaced. The chancel has mid
C19 painted communion boards (tin) a C19 piscina, good altar rails and tiling. The
nave has some C16 bench ends carved with foliage and tracery. The font has an
octagonal bowl on a stem, the bowl, decorated with heraldry, may have been recut in
the C19, the date of the tall pyramidal crocketted font cover. The C19 lectern re-
uses some C17 woodwork. The door into the tower turret is probably C15: a 2 plank
studded door in a chamfered, stopped doorway.
The chancel has a particularly interesting monument to Sir William Huddesfield
(d.1499): a purbeck marble tomb chest in a chamfered arched recess has a brass shield
with the bearings of Huddesfield and Courtenay. The lid of the chest is probably a
replacement or re-cutting of the original. Above the chest a small square brass
shows Sir William with his wife and children kneeling beneath depressed ogee arches.
Other memorials of interest include a brass wall plaque with a rustic inscription
commemorating John Seaman, died 1664. A wall tablet in the north transept
commemorates John Whiting, died 1726, with an eccentric verse: "Here under Whiting
lays troubles now cease/we hope he's gon to everlasting peace". C15 armorial stained
glass in the chancel has been carefully restored probably by Drake of Exeter, other
stained glass is by Beer of Exeter.