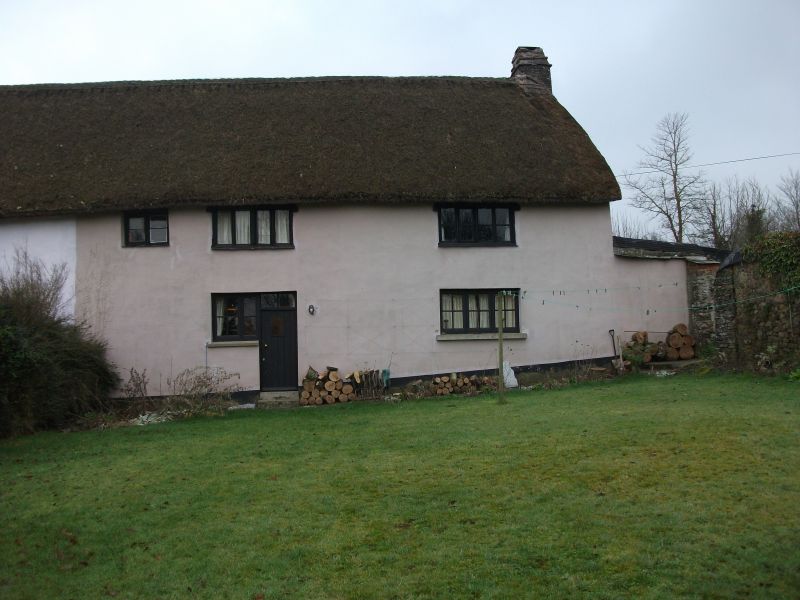 IDDESLEIGH
SS 50 NE
4/122 Nos 1 and 2 Week Cottages
including adjoining linhay to
- north-west
II*
GV
Pair of cottages, originally farmhouse. Circa early-mid C17 altered in C19 or
earlier C20. Rendered cob and rubble walls. Gable ended thatch roof. Brick stack
at left-hand end, and lateral stack at rear, rubble stack at right gable end with
moulded cap and dripcourses.
Plan: originally 3-room and through passage plan, lower end to the left with
probably integral small service wing behind it. Lower and inner rooms heated by
gable end fireplace with newel stairs beside that to the inner room. Hall heated by
rear lateral stack (may be original front). Behind inner room is a C17
outbuilding. In the circa later C17 a linhay was built extending behind the service
wing. In the later C19 or early C20 the house was downgraded from farmhouse to
cottages, divided at the lower end of the hall; the front door of the passage was
blocked and a new door inserted into the hall.
Exterior: 2 storeys. Asymmetrical 4-window front of 2 and 3-light C20 casements
apart from the 3 right-hand first floor windows. These are C17 ovolo-moulded wooden
mullion windows, the left-hand one is 2-light, the others 4-light with central King
mullion more richly moulded and timber hoodmoulds with labels. C20 plank door to
right of centre. Lower section at left-hand end has plank door. Rear elevation has
several features of interest. To left of centre is shallow stone projection partly
for chimney stack but also incorporating hall window. To right on first floor are 2
C17 chamfered wooden mullion windows, the left-hand one 2-light, the other has 4
narrow lights with leaded panes. Rear passage door is to right of centre. Single
storey outbuilding wing projects from left-hand end with chamfered wooden doorframe
on inner face.
2-storey wing projects from right-hand end. Extending from it is C17 open-fronted
linhay divided into 5 bays by chamfered wooden posts. It retains its original roof
trusses consisting of substantial straight principals with trenched purlins and
curved collars halved and dovetailed onto trusses.
Good interior which has suffered little C20 modernisation. No.1 to right has ovolo-
moulded axial beams in hall. The inner room has moulded axial beams with carved
stops. Late C17 or early C18 bolection moulded wooden fireplace. Wooden newel
stairs beside fireplace. No.2 to left has chamfered wooden doorframe with pyramid
stops from passage to lower room. Lower room has chamfered cross beams. Chamfered
plank and muntin screen to rear wing. On the first floor are 5 further original
chamfered doorframes, one has a C17 plank door and another a C18 fielded 2 panel
door. There is no access to the roofspace and the trusses are encased in plaster on
the first floor. None are obviously crucks but it is still possible that early roof
timbers may survive.
This house survives untouched by later C20 modernisation and preserves a number of
good quality carpentry features whilst others such as fireplaces and screens may
still be concealed. It also remains unaltered externally with an unusual number of
wooden mullion windows surviving and no additions later than the C17.