Parish Church of the Holy Innocents

A Grade I Listed Building in Lamarsh, Essex 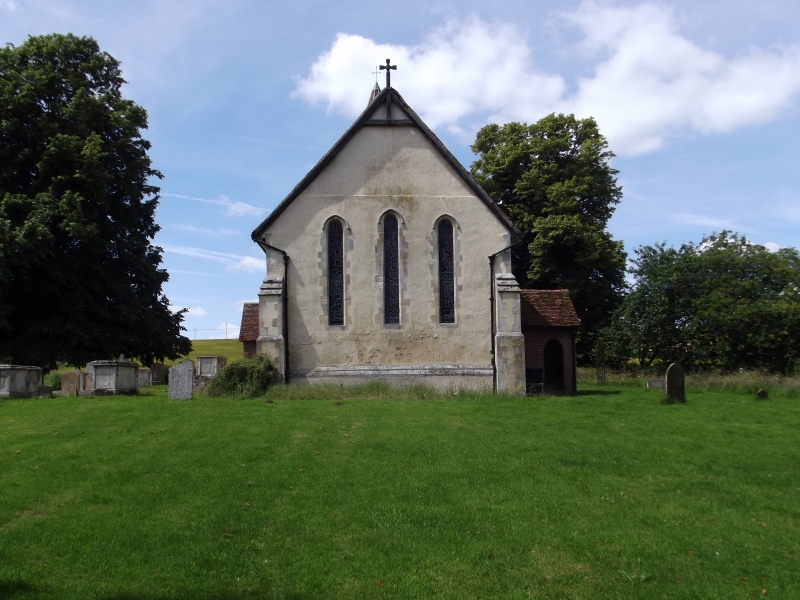 LAMARSH HENNY ROAD
TL 83 NE
(east side)
2/69 (25/523) Parish Church of the
Holy Innocents
21.6.62
GV I
Parish church. C12, altered in C14, restored 1869. Flint rubble with cement
rendering and dressings of clunch, S porch of red brick in English bond, roofs
of handmade red clay tiles. Round W tower, C12 or earlier, nave C12, chancel
rebuilt in C14, and extended approx. 1 metre to E in 1869. S porch c.1500. N
vestry and roof of tower 1869. The S wall of the chancel has 2 windows, the
eastern of 2 pointed lights with Y-tracery in a 2-centred head, restored; the
western has 2 pointed lights, C19/20, and a lower sill. Between the windows is
a C14 doorway with chamfered jambs and 2-centred head, restored. There is no
chancel arch; a thickening of the walls indicates its former position. The nave
has in the N wall 2 windows, C19 except for the C14 rear-arches and splays. At
the E end of the wall are the early C16 lower and upper doorways of the stair to
the rood-loft, both with chamfered jambs and 4-centred arches of brick, blocked.
In the S wall are 2 windows; the eastern is late C15, of 2 cinquefoiled lights
in a 4-centred head with moulded label and head, restored; the western is early
C14, of 2 trefoiled ogee lights with flowing tracery in a 2-centred head with
moulded label. Further W is the S doorway, c.1500, with moulded jambs and 4-
centred arch of brick, formerly plastered. The door is of V-edged boards with
strap-hinges having incised herringbone patterns, substantially C14, on a rear
frame rebuilt in the C19. The roof of the nave is in 5 cants, plastered to the
soffit, probably medieval. The W tower is early C12 or possibly earlier, built
in 3 stages, undivided externally. Part of the NW wall has fallen and been
repaired with brick, timber framing and plaster. The tower-arch and spire are
of 1869. There is a lancet window, c.1200, in the first stage, a round-headed
loop in the second stage, and another in the bell-chamber. The S porch, c.1500,
has an outer doorway with double-chamfered jambs and 4-centred head with moulded
label. At a later date the jambs have been rebated for gates, not now present.
In the gable is a niche with 4-centred arched head, originally blocked with
plaster or wood at the back, now open. In the E wall is a window of 2 round-
headed lights in a square head, and in the W wall a similar window with pointed
arches. There is a C14 stoup with plain round head E of the main door, and V-
headed niches in the SE and SW corners. The roof of the porch is of king-post
construction with moulded wallplates and an original framed and panelled timber
ceiling jointed with soffit tenons.