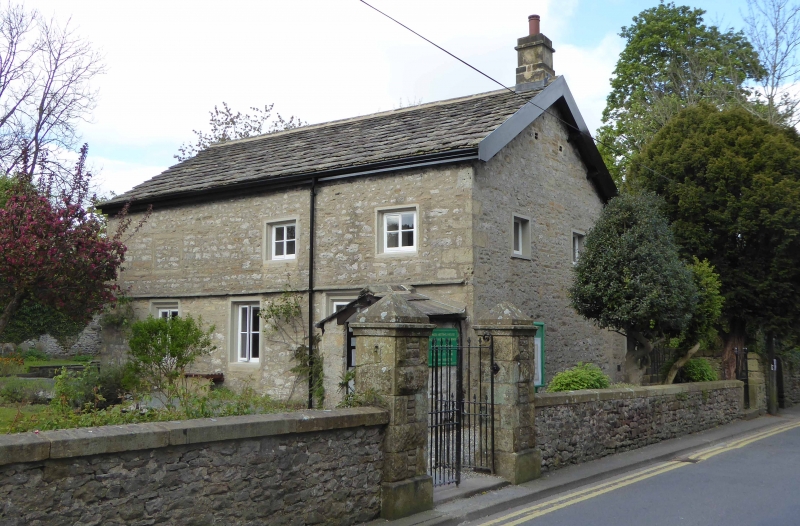 Quaker Meeting House, built in 1678 with later alterations, principally of 1729-1732 and the second half of the C19. Extension of 2004 built to the design of the architects Mason Gillibrand.

Quaker Meeting House, built in 1678 with later alterations, principally of 1729-1732 and the second half of the C19. Extension of 2004 built to the design of the architects Mason Gillibrand.

EXTERIOR: the main (east) front of four bays comprises, from left to right, three recessed chamfered square-headed stone window openings with four-light timber casement windows to the ground floor, and the gabled stone porch. Above a string course, the two right-hand bays are lit at first floor level by two similar, but shorter and irregularly disposed, window openings, with four-light timber casement windows. There is a built-up window opening to the south end at first floor level. The porch entrance has a cambered timber lintel over the outer doorway. The lintel of the inner chamfered stone door surround includes the date 1678 carved in relief over two panels.

The meeting house north gable end, facing onto Kirkgate, includes two small two-light casement windows to first floor level and a small two-light sash window lighting the internal gallery staircase. The side wall of the rear extension includes a four-panelled door with a transom light with the word INSTITUTE to the glass. This entrance is approached up four stone steps from Kirkgate. The rear elevation is comprised of the two-storey Institute’s gabled west wall, including two six-over-six sash windows and a gable end chimney stack. The meeting house south gable end includes a blocked central window to ground floor level, and two six-over-six sash windows above set in deep square-headed reveals. The single-storey stone-built 2004 extension by Mason Gillibrand is attached, by a partially-glazed link, to the south end of the Institute at the south-west corner of the meeting house.

INTERIOR: the C17 panelled meeting house door leads into a passage that extends the full length of the northern end of the meeting house. Including a screen made of re-set oak wainscot panelling, the passage provides access through a centrally-placed door into the meeting house, and into the Institute wing through a door in the west end.

The meeting room has a plain panelled dado below plastered walls. The Elders’ stand occupies the south wall with late-C18 fielded panelling at the back and sides with a fixed bench, and a C19 panelled front with a moulded hand-rail and turned stanchions and finials. The deep gallery occupying the first-floor space at the north end is carried on the original wooden beam supported by two hand-cut circular oak columns, with two boxed-in steel-reinforced wooden cross-beams supporting the gallery floor. The gallery’s front includes hinged oak shutters with fielded panelling. The meeting room has a flat ceiling.

The gallery, which includes a C19 fire place to its north wall, is accessed via a new staircase at the north end of the Institute wing. The Institute now comprises a full-height library space. The recent re-modelling included lowering the floor level and now a chimneypiece is retained high on the west wall. A hallway to the south leads into the new (2004) extension.

Fox asserted that no one place was holier than another, and in their early days, the new congregations often met for silent worship at outdoor locations; the use of member’s houses, barns, and other secular premises followed. Persecution of Nonconformists proliferated in the period, with Quakers suffering disproportionately. The Quaker Act of 1662, and the Conventicle Act of 1664, forbade their meetings, though they continued in defiance, and a number of meeting houses date from this early period. Broad Campden, Gloucestershire, came into Quaker use in 1663 and is the earliest meeting house in Britain, although it was out of use from 1871 to 1961. The meeting house at Hertford, 1670, is the oldest to be purpose built. The Act of Toleration, passed in 1689, was one of several steps towards freedom of worship outside the established church, and thereafter meeting houses began to make their mark on the landscape.

Throughout the C18 and early C19 many new meeting houses were built, or earlier buildings remodelled, with ‘polite’, Classically-informed designs appearing, reflecting architectural trends more widely. However, the buildings were generally of modest size and with minimal ornament, although examples in urban settings tended to be more architecturally ambitious. After 1800, it became more common for meeting houses to be designed by an architect or surveyor. The Victorian and Edwardian periods saw greater stylistic eclecticism, though the Gothic Revival associated with the Established Church was not embraced; on the other hand, Arts and Crafts principles had much in common with those of the Quakers, and a number of meeting houses show the influence of that movement.

Early followers of George Fox preached in Settle during the 1650s. These included the noted Quaker activist William Dewsbury (about 1621-1688) and John Camm, a Quaker preacher (1605-1657), who had to be protected from hostile crowds by local families. The meeting house, with a stable, was built in 1678 in a Quaker burial ground, only eight years after Hertford Meeting House (Grade I-listed, the oldest purpose-built Quaker Meeting House).

In 1713 some adjacent land was purchased to provide a garden and orchard. The meeting house was enlarged between 1729 and 1732 by raising the roof to create a gallery for the women’s meeting room. The meeting house Elders’ stand was altered about 1800. From 1860 the gallery was used as an Adult School, and soon afterwards an extension to the rear of the meeting house provided an Institute. In 1872 a separate Adult School, founded by Ellwood Brockbank, was built to the east side of the garden.

A kitchen and toilets were added to the meeting house in 1927. The buildings provided accommodation for evacuees during the Second World War. In 1963 the Adult School was converted into a warden’s house to plans by James Hartley and Son of Skipton. A new extension to the meeting house was built in 2004 to designs by the architects Mason Gillibrand, and at around that time the floor of the Institute was lowered. Later repairs to the meeting house were made in 2009 and 2015.

Notable Quakers associated with Settle meeting include Dr George Birkbeck (1776-1841), the physician and pioneer of adult education who founded the first mechanics Institutes, including that in London which was the forerunner of Birckbeck College, University of London.

* as an historic survivor of a C17 Quaker meeting house which retains its essential historic form and character;
* the Elders’ stand and other historic fabric preserved in the interior provide evidence for the division of space and internal arrangements typical for earlier Quaker meeting houses;
* as evidence of the development of the meeting house type, including the insertion of the gallery and provision of educational facilities.

* as an early purpose-built meeting house dating to 1678, constructed before the Act of Toleration of 1689, evidencing Quakers’ determination to practice their faith;
* for its close and evidenced associations with some of the earliest figures of the Quaker movement, and with later Quaker educationalists including Dr George Birkbeck.

* with the Grade II-listed Bond End and The Victoria Hall.